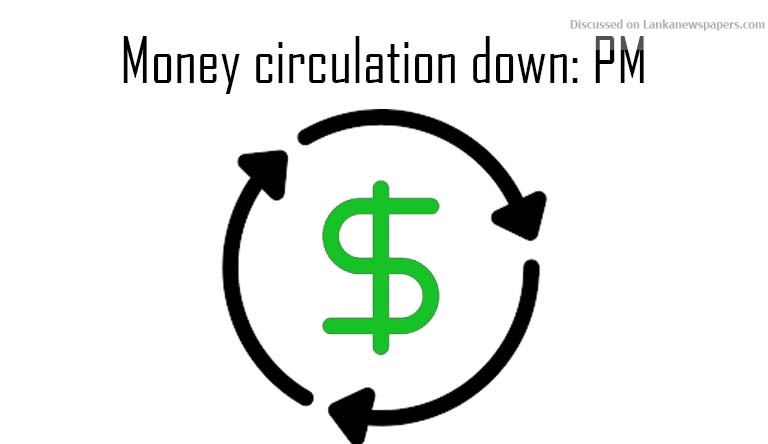 The demand for consumer goods had gone down as a result of money circulation decline in the country, Prime Minister Ranil Wickremesinghe said today.

However, he assured that the Government had decided to pump in money into the villages through the Gam Peraliya programme under which maintenance of tanks would be handed over to farmers.

Prime Minister Wickremesinghe said this while speaking at the launching of Gam Peraliya in Nikaweratiya last morning.

“Livelihood of the people in this area had come to a standstill as a result of the long-term drought, which lasted for four harvesting seasons.

“People in this area cannot cultivate crops. What can they do except cultivating crops? The economic downturn is visible today. Sales of consumer goods have gone down. Money circulation in the country has declined,” the Prime Minister said.

He said some areas had got water to cultivate essential crops but that was hardly efficient.

“This is why we decided to focus on villages. If we renovate tanks the villages will benefit from these projects. The contracts to desilt them will be given to the villagers themselves. The soil collected from desilting will be given to farmers. They can learn something from that. At the same time, the concessionary loans schemes will be launched for the rural people. The money would be pumped into the villages by these projects,” the Prime Minister added.

He also assured that infrastructure facilities will be enhanced as well. The Prime Minister revealed that new laws would be brought in to ensure that the farmers would benefit from it.

He said this is called Wevu Govisathu Kirima (Handing over the responsibility of maintaining tanks to the farmers in the villages).

“The Government also intends to provide assistance to those farmers who are willing to cultivate organic paddy,” he said.

The Prime Minister said Gam Peraliya was the second phase of Government’s programme to stabilise the economy.

“The first phase of this programme was to settle the debts. There were no funds to pay the loan instalments when we took over.

“We would have to go back to the era, where only two yards of cloth was given to a family if we were not able to find funds to settle debts.

“We found some funds but had to increase taxes to find more funds. We were criticized heavily for this,” he said.

The Prime Minister said that the tax structure would be changed as the Government felt that some taxes were unfair.

At the same time, he said the Government would also focus on large-scale development projects, especially for enhancing exports.