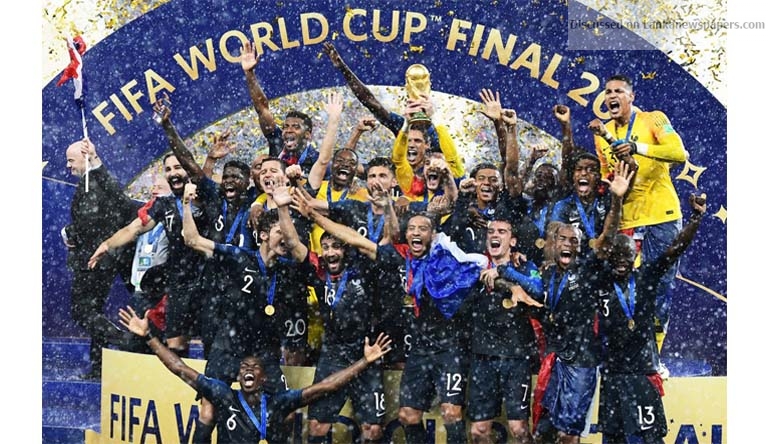 the rain soaked them to the skin, until that glistening trophy was safe in their hands and golden confetti sparkled in their hair.

Only then, once France’s players knew they had emerged triumphant from a World Cup of chaos and abandon, a tournament that defied expectation and prediction, did they succumb to the wild spirit of the last month and do the one thing they, and they alone, had managed to avoid.

At the end, after the end, the French finally lost control.

They celebrated at the final whistle, of course, their 4-2 victory over Croatia confirmed: Hugo Lloris led his teammates in an Icelandic thunderclap. The squad gathered together to hoist Didier Deschamps, its coach, into the air. Half a dozen players clambered into the stands to take French flags from the crowd.

Adil Rami and Olivier Giroud sprinted around the stadium, waving them in glee, but had the awareness, and the thoughtfulness, to stop and ask for forgiveness when they ventured too close to Croatia’s devastated fans. Up high, in the luxury suites among the royals and the politicians, Emmanuel Macron, the French president, was cutting loose — leaping to his feet, punching the air.

But it was only after Gianni Infantino, the FIFA president, had presented France’s players with the trophy that they had craved for so long, that their country and their heroes last held 20 years ago, that all of the emotion, constrained from the moment they arrived in Russia, came rushing out in waves.

The players tore away from the podium, sprinting through a thunderstorm, launching themselves chest-first onto the sodden grass and sliding toward their delirious fans.

They danced and they bounced and they ran in circles through the rain, pulsing with adrenaline, running like children — arms stretched wide, faces lit up with glee — running with nowhere in mind.

Where is there, after all, to go from here? This was their destination, their summit, right at the top of the world.

For the second time, France is champion of the world, and for the first time, this team has its own place in history. Deschamps is just the third person to win the World Cup as a player and as a coach. Kylian Mbappé is only the second teenager to score in the final, after Pelé. They have etched their names among the greats.

They did so in a final that fit the nature of the tournament, that crammed every theme of this World Cup into 90 breathless minutes. It was frenzied and compelling, more notable for its drama than its quality, Luzhniki Stadium providing an epic backdrop to an absorbing encounter.

Thunder rumbled in the sky. Pussy Riot emerged from the stands. Croatia, until the last moment, refused to wilt. There were two goals from set pieces and a cliffhanger of an intervention from a video assistant referee.

But it ended in the victory that France deserved. Not, necessarily, for what it did here: As both Dejan Lovren and Luka Modric observed, Croatia could rightly regard itself as the better team. No, France’s victory was warranted for what it had done over the last month. Or, more precisely, for what it had not done.

Deschamps’s team has been exceptional in Russia in more ways than one. At times, it almost seemed detached from the rest of the tournament unfolding around it, a representative from another, slightly more boring competition somewhere else.

Everyone else here seemed determined to make this World Cup as nerve-shredding and logic-defying as possible. Germany fell first to Mexico and then to South Korea. Argentina and Portugal, and Lionel Messi and Cristiano Ronaldo, limped on a little longer, and then melted away, too. Spain and Brazil slipped to Russia and to Belgium. This was a World Cup that first defied expectation and then prediction, a glorious mayhem, a month that captivated the planet with its volatility and its caprice.

France, though, plodded through, winning more games than friends. Throughout the group stage, it seemed to be playing within itself: restrained wins against Australia and Peru, a convenient stalemate with Denmark.

Deschamps had at his disposal more talent than any of his peers: the energy of N’Golo Kanté; the elegance of Paul Pogba; the ruthlessness of Antoine Griezmann and the shimmering brilliance of Mbappé.

And yet, a few minutes against Argentina apart, it felt impossible to get an accurate read of exactly how good the sum of those parts was: What France was could not quite escape the shadow of what it might be. A quarterfinal with Uruguay was decided by a set piece and a stroke of luck. The same, more or less, followed against Belgium, and an enigma was in the final of a tournament where everyone else was an open book.

Even then, on the grandest stage in the game, Deschamps seemed unwilling to unleash the full fury of his arsenal. Croatia, regarded by most as underdogs, had the ball, had the initiative. Twice in the first half, France took the lead, but it was not entirely clear how: It had not created a single chance.

Instead, it benefited from an own goal — Griezmann’s free kick skimming Mario Mandzukic’s head — and, after Ivan Perisic’s equalizer, a penalty, awarded by Néstor Pitana, the Argentine referee, for a hand ball by Perisic after several consultations both with the video referee and a video screen. “Our player did not have time to react,” Lovren said. “I was sure he would not give the penalty.” The furor, the long delay, made no difference: Griezmann converted. France, once again, could not be knocked off stride.

That was how it had been all tournament: serene progress, meeting each and every challenge thrown in its path with equanimity. This was the toughest of them all, such was the Croats’ grit, and France rose again. In the space of six minutes in the second half, it proved its critics right, and its coach, too.

Croatia did all it could to be the exception. It scrapped and it clawed to stay in contention; it played with the intensity of a team that knew this chance would not come again.

No team has contributed more to this World Cup than Modric — deservedly awarded the Golden Ball as the tournament’s best player — and his teammates; after three games that extended to extra time, they arrived in the final having played 90 minutes, an entire match’s worth, more than the French, so arduous has been their path.

This final step, though, was too much. Mandzukic still had time to score another, profiting from a Lloris error, but by then even the Croats must have known it was a mere consolation. When the final whistle blew, they crumpled to the field in despair, inconsolable, in tears for all that they had given, and for what, after all that, they had received.

That is what France has done throughout, however: With a cool head and clear eyes, it has ended dreams. It is not a role that lends itself to being lovable. France might have scored more goals in this tournament. It might have played a more adventurous style. It might have been more entertaining. There is still a sense of what it might be: Perhaps we will find out in four years, when this young team should be even better.

But none of that makes it any less deserving of its status, of its place in history, and none of that mattered to the players as they celebrated on the field, as they invaded Deschamps’s postmatch news conference spraying champagne and climbing on tables. Nor did it matter to the millions pouring onto the streets of Paris and Marseille and Lyon.

France is the world champion because it can shine brighter than anyone else, even if it only needs to do so for a moment. Because it came to win games and would worry later about hearts. Because it never lost control: of itself, of its opponents, of its destiny.

Only at the very end did it let go, did it allow all of the emotion and pride and wonder to bubble to the surface. Only when it stood on top of the world, only when everyone else had fallen by the wayside did France stand, with its arms outstretched, a smile on its face, and fall into the embrace of this extraordinary World Cup.