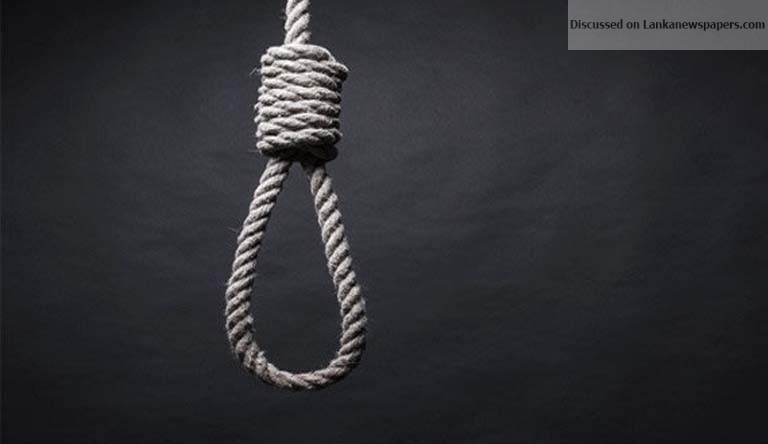 Prison authorities have prepared a list of 18 death row inmates for hanging and it is to be submitted for the President’s signature, but some of those have appeals against their convictions pending.

Notorious drug lords such as Vidana Pathiranage Samantha Kumara alias Wele Suda and Dharamaraja Sudesh alias Susei, who have been accused of operating drug cartels from death row were on the list of 18 inmates to be hanged, the Prisons Commissioner General said.

They, however, had appealed against their death sentences and they could not be hanged till the appeals were concluded, Dhanasinghe said.

Prisons Media Spokesman, Prisons Commissioner Thushara Upuldeniya told The Island that there were around 1,240 inmates sentenced to death in prisons countrywide, and counting. “As at Friday last week there were 874 death row inmates who had appealed against their sentences. There are 374 condemned to death as their appeals have failed. Among them are 18 inmates convicted of repeat drug offences. Their names are included in the list to be forwarded to the President for implementation of the death penalty, according to Upuldeniya.

Susei was sentenced to death by Colombo High Court on March 30, 2017 after he had been found guilty of possessing two kilos and 250 grams of heroin. He has appealed against the death sentence. Last week, the Police Narcotics Bureau seized 124 kilos of heroin from Kalubowila, and it said to be the biggest ever heroin haul taken into custody inland during the 45-year-old history of the PNB and the persons taken into custody divulged to police that it belonged to Susei, who was running drug businesses from the Welikada prison.

Wele Suda was sentenced to death after being found guilty of peddling drugs and possessing heroin on Oct 14, 2015 by the Colombo High Court and there are several other cases pending against him. He has been accused laundering black money to the tune of Rs. 190 million in 2006. On Feb 18, this year he was acquitted and released from one case that was filed against him over smuggling drugs. The order was issued due to contradictions in evidence pertaining to the case. In that case indictments had been filed against Wele Suda at the Colombo High Court for the possession of 6.7 grams of heroin. However, it was revealed before the court that there was a contradiction in the amount of heroin taken into custody from the possession of the suspect and the amount sent the Government Analyst.

Meanwhile, the Human Rights Commission of Sri Lanka, in a letter to President Sirisena, yesterday, urged him to reconsider his decision to lift the moratorium on the death penalty, saying it violated a person’s right to life and freedom from cruel and degrading punishment.

In her letter to President Sirisena, HRCSL Chairperson Dr Deepika Udagama has noted that the death penalty is an extreme and irrevocable punishment, has proven ineffective in curbing serious crime, adding that the Commission had already recommended abolishing the practice in a recommendation in 2016.

President of the Committee for Protecting Rights of Prisoners (CPRP) Attorney-at-Law Senaka Perera told The Island that CPRP was opposed to restoration of death penalty. The High Court handed down death penalty on the basis of evidence and documents submitted by the police. Police were notorious for obtaining forced confessions from the suspects. So, the death penalty could be passed on the basis of wrong and false evidence.

“We are against prisoners running drug business. That is illegal. But everybody knows that they do not grow poppy or cannabis in prisons. They run businesses using mobile phones. Who supply them the phones to the prisons? Who permits them to run their businesses behind bars? Why cannot the government to prevent prisoners getting hold of wherewithal to operate businesses rather than hanging them without respecting their right to rehabilitation?”