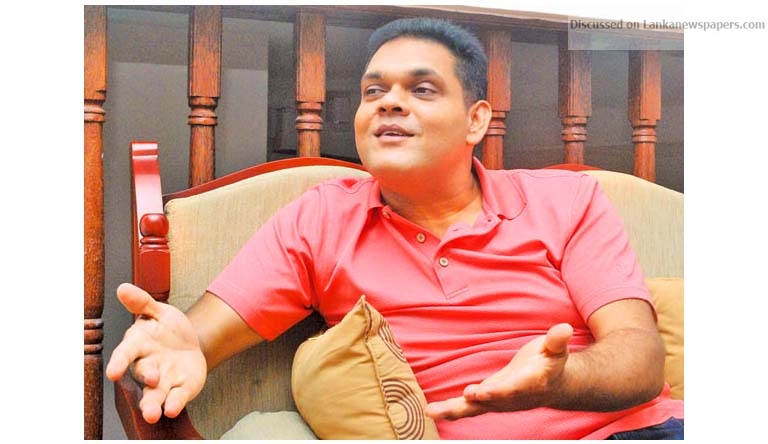 Anuradhapura District UPFA MP Shehan Semasinghe says a comprehensive inquiry is needed to ascertain US funding made available to some party/parties in the run-up to January 2015 presidential election.

Responding to a query by The Island, the SLFPer said that UNP backbenchers had demanded presidential probe into CHEC funding. Referring to a statement issued by former President Rajapaksa on July 1 in response to NYT allegations, Semasinghe urged the government to probe disbursement of foreign funds in the run up to the last presidential poll.

Pointing out that NYT had acknowledged that its report was based on ongoing Sri Lanka government investigation therefore law enforcement authorities should act on their findings without further delay, Semasinghe called for probe on the State Department revelation that the US spent $585 mn in promoting democracy across the globe in 2015, including Sri Lanka.

The MP said that though the US State Department financial report for 2016 fiscal year hadn’t specified the overseas projects funded by the agency, the then Secretary of State John Kerry wrote in the foreword that they had supported important democratic gains in Sri Lanka, Nigeria, and Burma.”

The lawmaker acknowledged that the JO, too, was at fault as it didn’t take up this issue much earlier. “Yes. I believe we should have raised this issue both with the government and the US embassy in Colombo.”

Semasinghe said that those who had been demanding probe on NYT report were never bothered by the underhand acts of the State Department. “So let there be a probe on both alleged Chinese funding claim and State Department revelation.”

Semasinghe quoted Kerry as having told the fiscal report: “in an era of diffuse and networked power, we (the US) are focusing on strengthening partnerships with civil society, citizen movements, faith leaders, entrepreneurs, innovators, and others to promote democracy and good governance and address gender-based violence.”

“We should be grateful to the authors of the State Department report for revealing the truth, unwittingly,” Semasinghe said, pointing out whatever the beautiful phrases used by the authors, the bottom line is that the US funded campaign against the then President Rajapaksa.

Semasinghe said the US role and funding at 2015 presidential poll should be examined against the backdrop of Wiki Leaks revelations regarding the US backing for General Sarath Fonseka’s candidature in 2010.

If one third of the total US ‘investment’ USD 585 had been made in Sri Lanka, that allocation amounted to a staggering USD 195 mn, the lawmaker said. Compare that amount with NYT claim regarding CHEC funding amounting to USD 7.6 mn, the MP said, adding that the Sirisena-Wickremesinghe administration and the US embassy owed an explanation.

Semasinghe acknowledged that the US funding may not have been shared equally by Nigeria, Myanmar and Sri Lanka. “Ok. Let us assume, USD 585 wasn’t shared equally and we got one fifth of the total allocation. Still that amount would have come to a staggering USD 117 mn.”

The JO member said that the public should not be deprived of their right to know the truth. In fact, it would be interesting to know how Myanmar and Nigeria responded to US funding claim, Semasinghe said.

Responding to another query, Semasinghe admitted that the US funding claim hadn’t been addressed until the NYT targeted the former President.

Semasinghe said that General Sarath Fonseka and Maithripala Sirisena both contested under the symbol of swan in January 2010 and January 2015, respectively. Their candidate received the backing of a coalition comprising the UNP, JVP, TNA and SLMC in addition to influential civil society grouping, Semasinghe said, urging the National Election Commission (NEC) to inquire into NYT and State Department reports.

Semasinghe asserted that the parliament should be briefed on the US funding and the status of police probe on NYT claim. The MP said that the State Department revelation couldn’t be compared with NYT claim as the former spoke on behalf of the US Government.

The SLFPer said that foreign interference in national election shouldn’t be allowed under any circumstances. With the next presidential poll scheduled for Nov/Dec 2019, it would be the responsibility of the parliament, NEC and political parties to reach consensus on campaign financing, Semasinghe said.

Asked whether the campaign finances had been an issue, Semasinghe admitted that political parties and civil society never really took it up until the NYT report.

Semasinghe said that in addition to the funds mentioned in the State Department report, the US admitted in response to a query by Hasina Leelaratne, US based former journalist with the Times of Ceylon, funding yahapalana administration to the tune of USD 3.4 mn after the presidential poll. The proposed Presidential Commission could inquire into USD 3.4 mn funding, the lawmaker said.

Semasinghe said that those who had been complaining about China funding never uttered a word about heavy Western interference in domestic politics here. Referring to UNP MP Thushara Indunil’s declaration at Sirikotha on Monday (July 9), Semasinghe said the JO welcomed proposed two-day debate in parliament where the US funding, too, could be debated.

The lawmaker said that the US funding took place during the tenure of Michele Jeanne Sison and Atul Keshap as US Ambassador in Colombo.

The Anuradhapura District MP said that in spite of massive funding, the US couldn’t thwart the UNP from perpetrating treasury bond scams, twice in early 2015 and 2016. The MP said that he always wondered whether some of those bond racketeers, too, benefited from US funding.

Semasinghe said that the NYT could also probe and reveal those who had received millions of US dollars from the State Department funds to work on a clandestine regime change.