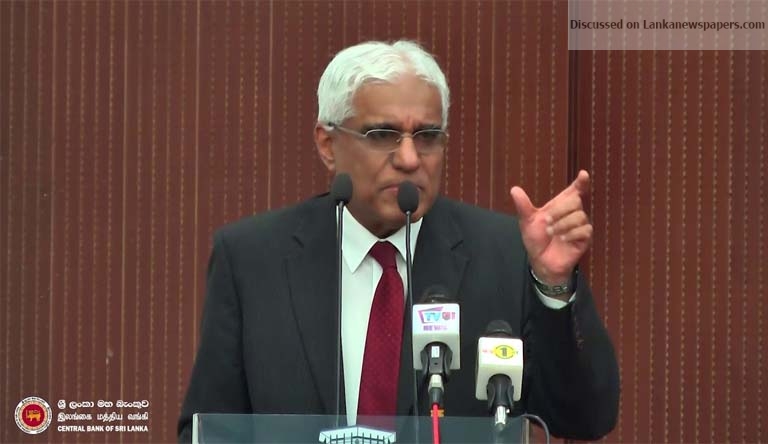 “Sri Lanka could have balance of payments trouble if rates are cut when imports are expanding and the current account is widening, Therefore, we could control gold imports with a tax on gold while currency deprecation and other fiscal measures could help control vehicle imports, Coomaraswamy said. He was speaking at a press conference on Friday at the Central Bank auditorium in Colombo.

He said that moderation of earnings from exports alongside the increase in import expenditure resulted in an expansion of the trade deficit over the first four months of 2018.

‘The recent growth in imports was largely driven by the importation of personal vehicles and gold, and the latter is expected to have been addressed by the imposition of the customs duty on gold imports, he said.

“Earnings from tourism and workers’ remittances have continued their positive growth momentum so far during the year,” he added..

The Governor also said that tightening global financial conditions prompted some outflows from the rupee denominated government securities market and the secondary market of the Colombo Stock Exchange (CSE), although primary market inflows resulted in a net overall inflow to the CSE so far during the year.

Amid these developments, the Central Bank recorded a net foreign exchange absorption of US dollars 141 million from the domestic market in the first half of 2018.

He said that with the successful issuance of the International Sovereign Bond (ISB) in April 2018, the receipt of the fifth tranche of the Extended Fund Facility with the International Monetary Fund (IMF-EFF), receipts from the divestiture of the Hambantota port and foreign exchange purchases of the Central Bank from the domestic market in early 2018, the gross official reserve position is estimated to have improved to around US dollars 9.2 billion by end June 2018, compared to US dollars 8.0 billion at end 2017.

“So far during the year, the Sri Lankan rupee has depreciated against the US dollar by 3.6 per cent,” the Governor said.

‘Much of this depreciation was recorded since late April, reflecting the broad based strengthening of the US dollar in the international market.