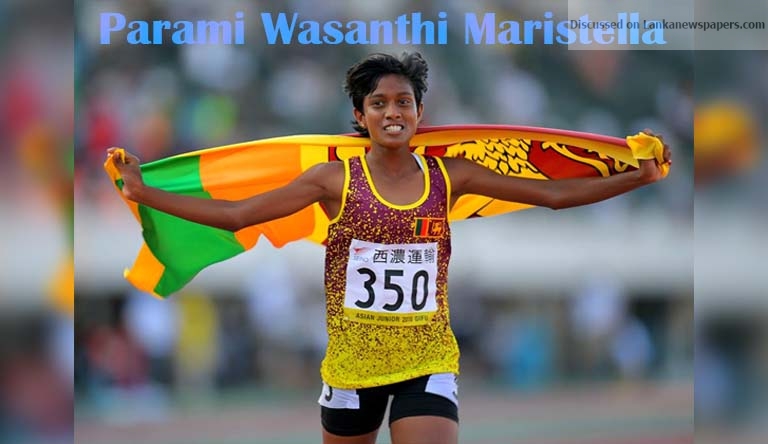 In this file picture by Dimuthu Premaratne, Parami Wasanthi Maristella leads the 2,000 metres steeplechase at the recently held Junior National Athletics Championships at the Sugathadasa Stadium. Maristella has clocked a world leading time in the Under-18 category.

In a history making performance for Sri Lanka Athletics, Parami Wasanthi Maristella clocked a stunning world leading time of six minutes and 35.20 seconds in the girls’ 2,000 metres steeplechase to book her place for the Youth Olympics yesterday, the Athletics Association of Sri Lanka confirmed.

The athlete hailing from Kuliyapitiya won the event conducted to select the Asian region’s participants for the quadrennial event in Thailand yesterday.

The Youth Olympics will be held from October 6 to 18 in Buenos Aires, Argentina.

Maristella’s previous personal beat of 3: 59.63 seconds was ranked 50th in the world and her stunning feat will now put her on top of the IAAF list in the Youth category. The top spot is currently occupied by France’s Claire Palou, who had clocked 6:35.80 seconds on June 9.

The athlete is coached by Janith Jayasuriya.

“She will get the top spot of the IAAF list when they update the statistics,” the AASL statistician Saman Kumara told The Island yesterday.

Saman Kumara said that it was the first time that a Sri Lankan athlete topped world rankings at any level (Youth, Junior or Senior).

Meanwhile, Ashmika Herath who is also coached by Jayasuriya has returned a time of 7.08.05 seconds to be placed third.

In yet another story of beating odds, Sir John Kothalawala College, Kurunegala sprinter Dinal Bogoda took the Asian number one title in the youth category in the boys’ 400 metres at the same Youth Olympics qualifying meet on Wednesday.

Less than a month after Aruna Dharshana and Pasindu Kodikara took the gold and silver in the 400 metres for Sri Lanka at the Asian Junior Championship, Bogoda an athlete hailing from a not so well to do family from Kurunegala grabbed the top spot in the 400 metres in the Youth category in Asia when he clocked 48.56 seconds to win the final of the youth event in Bangkok.

Bogoda had an impressive youth career under coach Sunethra Karunanayake. He produced his first notable performance in 2015 when he won the All Island Schools Games Under-15 400 metres with a record.

Coaches and athletics powerhouses of Colombo had a keen interest in bringing the athlete down to Colombo. He was recruited by St. Benedict’s but the athlete went through a lean patch at Kotahena. Last year, once again he moved to his former school where he once again came under the tutelage of Karunanayake who trained him to break the Junior National Under-18 boys’ 400 metres record.