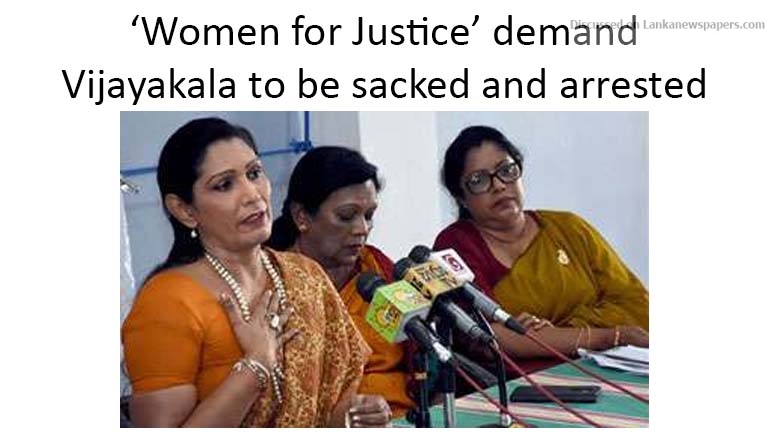 Referring to the statement made by State Minister of Child Affairs Vijayakala Maheswaran in Jaffna, where she said there was a need for the reorganization of the LTTE in the North and East, the organization of ‘Women for Justice’ demanded the relevant Minister to be sacked and arrested.

Addressing a news conference – ‘Women for Justice’ Co-President Sharmila Gonawala said what she had proclaimed could not be condoned because she wanted the LTTE, a prohibited organization to come again and put the people of this county in danger.

“We can’t remain silent when such controversial statements were being made by State officials. She must have forgotten the miserable era we had during the time of war. We never want such an era again,” Gonawala said.

She said they hoped to lodge a complaint to the Terrorist Investigation Division (TID) tomorrow over the statement of the Minister.

Meanwhile, ‘Women for Justice’ Secretary Savithri Gunasekara said MP Vijayakala is not even eligible to hold the post of MP.

“She being the State Minister of Child Affairs said the children of the North and East would be safer when the LTTE would come again. She has forgotten how the children were deprived of their education and forced to join the LTTE military groups by wearing cyanide capsule during the war,” Gunasekara said.

Therefore, they insisted the Government to take prompt action over her statement.