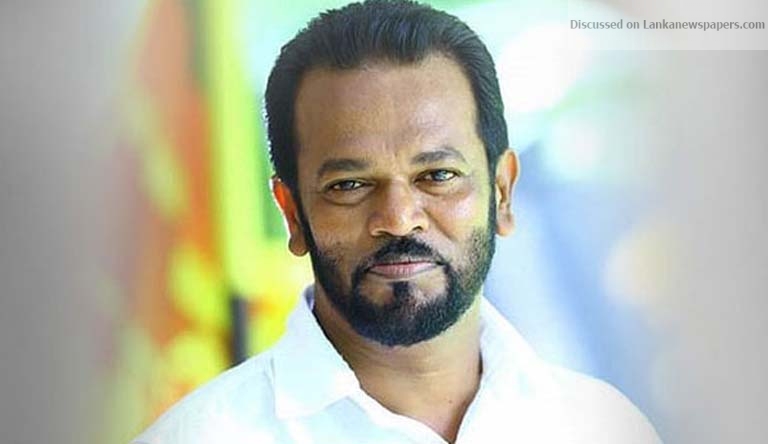 Elite police commandos recently thwarted an attempt by Deputy Minister of Sustainable Development, Wildlife and Regional Development, Palitha Thewarapperuma, to intervene in an undercover operation carried out in Sooriyawewa, targeting those engaged in illegal sand-mining.

Authoritative sources told The Island that Thewarapperuma, who had been on his way to inspect the ongoing construction of a fence to hinder elephant movements, questioned personnel as to why they were in civvies.The Minister rode a motorcycle to the scene, sans a helmet. The pillion rider, believed to be a member of his security squad, too, was without a helmet. Sources said that police bodyguards hadn’t intervened, while a camera crew, accompanying the politician, videoed the whole scene.

Accusing them of harassing people, the Kalutara District UNP MP questioned them as regards their attire, long hair and the nature of their operation, sources said. The UNPer also queried as to why a commando snatched a hand phone belonging to a detained person, sources said.

Responding to a query, sources said that undercover personnel had been deployed to inquire into illegal sand-mining operation, following the receipt of a petition.

However, commandos in civvies had alerted the local STF base resulting in an armed squad, led by the Officer-in-Charge of the Sooriyawewa detachment arriving at the scene. The OIC and a Sub Inspector politely but quite firmly told the Deputy Minister that he was interfering in a legitimate law enforcement operation.

The Deputy Minister was also told that the commandos had the right to operate in civvies, sources said. Of course, personnel always carried police and STF identity cards and were backed by armed squads ready to intervene at short notice, sources said.

Sooriyawewa comes under the purview of the Southern Zonal Command responsible for deployment in the Galle and Hambantota Districts.

Sources said that the senior STF officer, at the scene, had explained to the politician that the police reserved the right to take hand phones and permits issued by relevant authorities into custody. Sources acknowledged that the Deputy Minister hadn’t been influenced by anyone. Obviously, MP Thewarapperuma had intervened after seeing a commotion by the side of a muddy road, sources said, adding that by then two heavy vehicles carrying sand and their drivers were in STF custody.

Later, the senior STF present directed his subordinates to hand over the suspects and the heavy vehicles to the Sooriyawewa police station.

The STF headquarters have received a comprehensive report as regards the Sooriyawewa incident.

Sooriyawewa detachment alone had made about 80 detections so far this month, sources said, adding that generally the STF operations there weren’t hampered by political interference.

In May this year, Thewarapperuma forcibly halted a disaster management rehearsal, involving the Galewela government hospital. The Government Medical Officers’ Association flayed Thewarapperuma over the incident.

A Senior police officer said that STF detachments regularly received a significant number of public petitions/complaints as ordinary people had faith in the elite outfit.

According to daily situation reports, issued by police headquarters and the STF, the latter was responsible for a growing number of detections in the provinces.

Sources said that law enforcement in the provinces had been strengthened as a result of the STF deployment since the conclusion of the conflict in 2009.