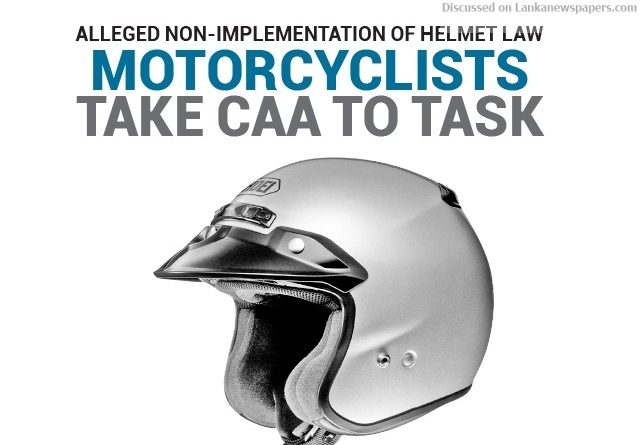 The Ceylon Motorcyclists Association (CMA) Friday (22) expressed disapproval over the failure of the Consumer Affairs Authority (CAA) to implement the law on the standards of helmets and thereby endangering the lives of motorcyclists.
In a letter to CAA Chairman, Hasitha Tillekeratne, CMA Chairman Chirantha Amarasinghe, alleged that helmets should adhere to Sri Lanka Standards (SLS) 517 according to the Gazette notice 1923/65 issued on 15 July 2015.

The failure of the CAA to implement this law had paved the way for local businessmen to sell low quality helmets fashioned in accordance with the external features of those of superior quality, he pointed out.
In a letter which was also copied to the Presidential Secretary, the Secretary – Ministry of Transport and Civil Aviation and the Inspector General of Police (IGP), Amarasinghe alleged that the businesses made profit on low quality helmets while the CAA’s apparent inability to implement the law was giving them further encouragement to reduce the quality of helmets even further. He said that the situation was only compromising the safety of motorcyclists.
The Chairman of the CMA said that his Union strongly opposed the sale of any low quality helmet other than DOT, SNELL and ECE which maintained the required standards.
Although there were no existing regulations for children’s helmets, motorcyclists had no option but to purchase what was available in the market to maintain at least a semblance of safety for their children, he added.
He requested a written explanation from the CAA as to why it was unable to implement the law on the helmet standards.
“The government maintained a correct policy in ensuring the quality of the helmet before it was sold. Standards should not only be maintained when wearing the helmet but also when selling it to a customer. Unfortunately, the CAA has been unable to execute this law. The Authority was only leaving room for corrupt businessmen to override it,” he claimed.
Amarasinghe urged the Government to ensure that action was taken to ensure the execution of the law without further delay. “Only the poor motorcycle riders are fined for allegedly committing various offences whereas those corrupt businessmen, who sold low quality helmets, are able to get away with it and even win political favour.”
The CAA Chairman was not available for a comment.