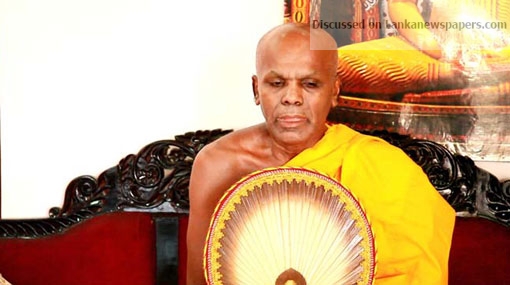 The Anunayaka Thero of the Asgiri Chapter, Venerable Wedaruwe Upali Thero, today issued statement to clarify the comments he had made during a religious ceremony held recently to invoke blessing on former Defence Secretary Gotabaya Rajapaksa on his birthday.

During the event, the Thero blessed Rajapaksa on his 69th birthday on Wednesday (20) while encouraging him to come to power and “rebuild the country” even if it means establishing military rule.

“Some people have described you as a Hitler,” he had said referring to Gotabaya before adding: “Be a Hitler. Go with the military and take the leadership of this country.”

The Thero’s comments had come under heavy criticism from various sections of the country including politicians and civil society groups who warned that it was a bad precedence.

However, issuing a statement today the Anunayake Thero said that what he meant was that direct policies are necessary to govern a country and that he did not mean a brutal regime by killing people like that of Hitler’s.