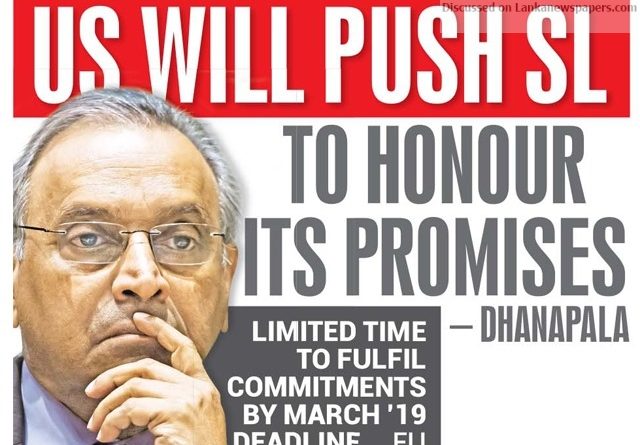 Former UN Under-Secretary-General for Disarmament Jayantha Dhanapala, commenting on the United States of America (US) quitting the United Nations Human Rights Council (UNHRC), said “The US will continue lobby its friends to do so and will push Sri Lanka to honour its promises, which as a member of a multilateral body, we are obliged to do.”

He added that whether in or out of the HRC the US has said it will continue to pursue the implementation of the 2015 resolution on Sri Lanka.
“It is well known that previous US Republican Administrations had had problems with the HRC, quit it and then rejoined.

The main reason they did so was over UNHRC resolutions on Israel, which were by and large supported by us and not resolutions on Sri Lanka,” he said.
He added: “It is short-sighted of Sri Lanka, in the long term, to oppose the US position on its Human Rights record, which took place under a Rajapaksa Administration, which violated the human rights of the people. The dramatic transition of January 8, 2015 piloted by Ven. Sobitha thera, must not be reversed.”
Also, on Sri Lanka and US co-sponsored resolution and the US abandoning the HRC, Head of the Political, Trade and Communications Section delegation of the European Union to Sri Lanka and the Maldives, Paul Godfrey told Ceylon Today, “There is now limited time to fulfil the commitments made in resolution 30/1 by the deadline of March 2019 and it is vital that the Government use this opportunity to put in place a lasting and durable foundation for national reconciliation. The US decision to quit has no impact specifically on Sri Lanka, he said adding “I would be surprised if there was any change in the US policy on the need for Sri Lanka to fulfil the commitments the Government made at the HRC.”
He said that the GoSL is a co-sponsor of the resolution and these were commitments that the Government made and to which they recommitted in March 2017. That was an important recognition that these commitments are for the benefit of the future of Sri Lanka and all Sri Lankans.

Godfrey also noted that the EU is providing approximately €300 million to Sri Lanka in grants over a period stretching from 2007-2020.
That, he said, “is supplemented by specific humanitarian responses to, for instance, flooding and other natural disasters. It does not include the benefits from GSP Plus, which are evidently much more substantial.

”He also reiterate the point made by the EU spokesperson on the US decision to quit and noted, “The US has always been at the forefront of the protection of human rights around the world and has for many years been a strong partner of the European Union in the Human Rights Council.

Today’s decision risks undermining the role of the US as a champion and supporter of democracy on the world stage. The European Union will nevertheless continue to defend human rights and fundamental freedoms, whether in multilateral fora or around the world, also by cooperating with the US whenever possible, he said