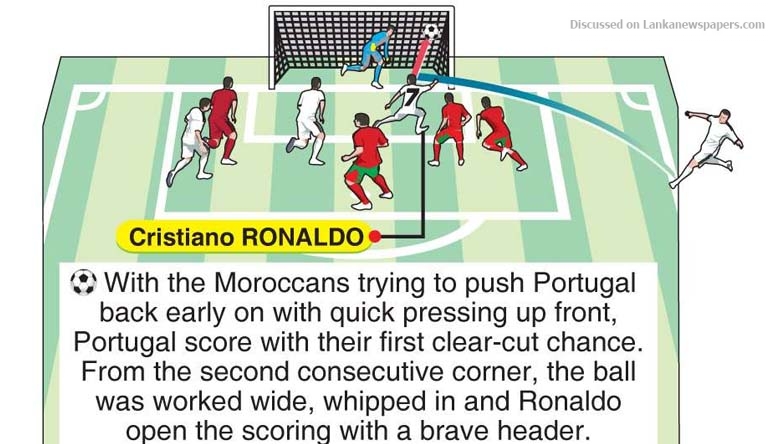 Cristiano Ronaldo continued his sensational start to the World Cup with the winner as Portugal knocked Morocco out of the tournament yesterday.

All eyes at the Luzhniki Stadium were on the Real Madrid star after his hat-trick in Portugal’s opening game with Spain and, typically, he did not disappoint.

It took the captain only four minutes to make his mark in the way Morocco had feared, diving to get on the end of a Joao Moutinho cross and planting an unstoppable header into the net.

Ronaldo’s goal put the European champions top of Group ‘B’ and extended his lead as the top scorer in Russia in the race for the Golden Boot.

Morocco, who last week failed in their bid to host the 2026 World Cup, became the first team to be eliminated from this one with one Group ‘B’ game to go – but they did not go down without a fight.

Backed by thousands of noisy fans, who packed one end of the ground, they created enough chances to earn at least a draw – and would have got something out of the game with better finishing.

Too many of their shots flew wide, however, and the one time the North Africans did find the target with an effort of note, new Wolves keeper Rui Patricio produced a brilliant one-handed diving save to keep out Younes Belhanda’s header.

The North African Nation, beaten 0-1 by Iran in their opening game are playing at the World Cup for the first time in 20 years.