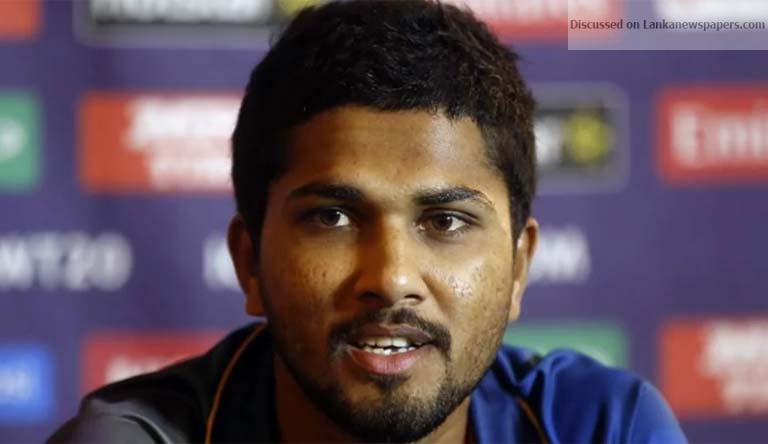 Sri Lanka Test captain Dinesh Chandimal has been suspended from Sri Lanka’s 3rd and final test outing against the West Indies after he was found guilty of changing the condition of the ball during the second day of the 2nd Test. In addition Chandimal, Coach Chandika Hathurusinghe and manager Asanka Gurusinha have also been charged for conduct contrary to the spirit of the game.

Following the conclusion of the second test match that ended in a draw, a hearing was held and video evidence was presented before the Sri Lanka team management as well as match officials.

Indian match referee Javagal Srinath handed Chandimal the maximum punishment available – two suspension points and a fine of 100 per cent of his match fee. A release issued by the ICC carried the following statement by Srinath

“After reviewing the footage of the incident, it is clear that Dinesh applied an artificial substance to the ball, namely saliva containing the residue of something he had in his mouth, an action which is prohibited under the ICC Code of Conduct. The footage shows that upon receiving the ball, Dinesh took something from his pocket and put it into his mouth. After sucking or chewing whatever he put in his mouth for a few seconds, Dinesh then proceeded to spit on his finger and polish the ball with his saliva which would have contained the residue of the artificial substance that he had in his mouth, on two separate occasions.”

Meanwhile, another ICC release carried a statement by ICC Chief Executive David Richardson who charged Sri Lanka captain Dinesh Chandimal, coach Chandika Hathurusinghe and manager Asanka Gurusinha with a breach of Article 2.3.1, a Level 3 offence, which relates to “conduct that is contrary to the spirit of the game”.

The three have been charged for their involvement in the Sri Lanka cricket team’s refusal to take to the field in St Lucia at the start of Saturday’s play, which caused a two-hour delay in the start of play.

If any of the three plead not guilty, then the ICC will appoint a Judicial Commissioner from its Code of Conduct Commission to determine the matter. All Level 3 breaches carry an imposition of between four and eight suspension points.