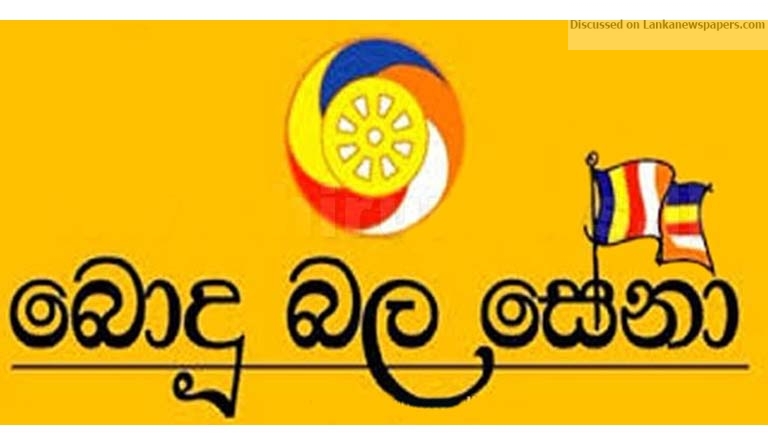 Although special protection has been sought by the Sihala Ravaya for Galagoda Aththe Gnanasara Thera, who is serving a prison term, a presidential pardon would not be sought.

General Secretary of Sihala Ravaya, Magalkande Sudaththa Thera yesterday (15) said they requested special protection for the General Secretary of Bodu Bala Sena (BBS), who is serving……a prison term, due to a risk to his life. Meanwhile, CEO of the BBS, Dr. Dilanthe Withanage said that no presidential pardon would be sought for the incarcerated monk.
Gnanasara Thera was sentenced by the Homagama Chief Magistrate Udesh Ranathunga on 14 June to one year rigorous imprisonment to be served in six months, after the Thera was convicted of threatening journalist Prageeth Ekneligoda’s wife Sandhya Ekneligoda within the Court premises and was found to be in contempt of court. Previously on 24 May he was found guilty of criminal harassment and criminal intimidation. Apart from the prison sentence, the Thera has been ordered to pay a fine to the aggrieved party. Meanwhile, an appeal was lodged in the High Court on 14 June against the conviction.
Sudaththa Thera told a press briefing at the BBS office in Rajagiriya, “Gnanasara Thera has received death threats from certain persons and organizations. Hence, we fear that his life might be at risk while in prison. Therefore, we have requested the Commissioner General of Prisons to provide necessary protection because his life is precious to Buddhists and the clergy, even though it isn’t valuable for some politicians. The Thera also suffers from various medical conditions for which he is under treatment. We have requested the Commissioner General to look into this and take necessary precaution with the advice of the doctor in charge of the Prison Hospital.”