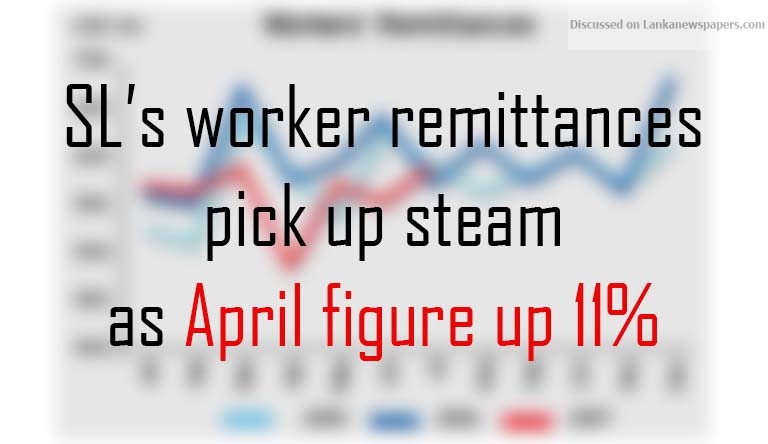 Worker remittances to Sri Lanka appear to have stabilized lately as the income from the Sri Lankan migrant worker community grew for the second month in a row in April.

Sri Lanka has received US $ 541 million from the Sri Lankans working abroad, mainly in the Gulf region as domestic aides and semi-skilled workers, an increase of 11 percent from the same month a year ago, taking the first four months’ remittance income to US $ 2.5 billion, up 5 percent over the same period in 2017.

Worker remittance to Sri Lanka lost steam during the last three years as the Gulf countries, which absorb the bulk of the migrant workers from Sri Lanka, had a difficult time amid the falling global oil prices.

Since then, the region suffered a blunt fiscal squeeze and as a way out, the countries in the region began to diversify their economies out of over-dependence on oil. Apart from that, the Organisation for Petroleum Exporting Countries, the biggest cartel which sets global oil prices, began to curb production to stabilize the prices.

Worker remittance is Sri Lanka’s largest foreign exchange income earner and the biggest consolation to the balance of payment (BoP) as the trade account in the BoP leaves about a US $ 11 billion hole.
The majority of migrants flying from Sri Lanka to the Gulf are women as housemaids, as they want to overcome the rural economic hardships and attain a better living condition and give better education to their children.

However, many of them face numerous physical and mental abuse in the hands of their master and sometimes return home handicapped.

While worker remittances bring home the much-needed dollars, migration has created many socio-economic problems in other sectors as a larger migrant worker population has also been cited as one of the reasons for the current labour shortage facing industry at home.

In any case, the government’s policy doesn’t appear to slow down the number of people going abroad as the Sri Lankan economy is almost at the mercy of the dollars sent home from the blood and sweat of the mothers and sisters working abroad.