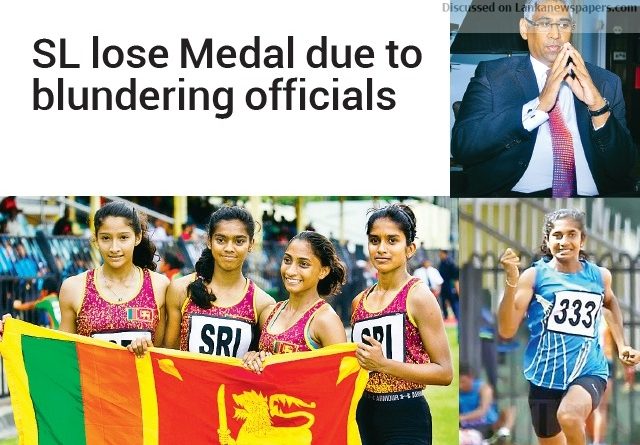 Imprudent acts of officials cost another possible medal at the Asian Junior Athletic Championship raising many eye brows over the conduct of so called responsible officials of the Athletics Association (AASL) and Sports Ministry.
As Ceylon Today revealed earlier in several articles, AASL decided not to send the girls’ 4x100m relay team for the Asian Junior Championship even after they clocked a record breaking 46.23 seconds to win the Gold medal at South Asian Juniors, that too without proper baton changers. Even that timing was sufficient for a medal as the bronze medal at the Asian Junior Championship was won in a time of just 47.00 seconds by Chinese Taipei yesterday in Japan.
It was Sports Minister Faiszer Musthapha who said not to send any athlete to international competitions if they aren’t in the medal range, as in previous editions where they took part. AASL uses this to hide behind and omitted the girls’ relay teams though most of the senior officials at AASL itself pushed for the inclusion of the teams.

It was evident even for a child who follows athletics that the team was well within medal range at this Asian Junior Championship as three of their junior sprinters, Amasha de Silva (11.92 to 11.71 seconds), Sharmila Jan (12. 34 to 12.17 seconds) and Ewanthi Imeshika (12.29 to 12.20 seconds) enhanced their personal best in of 100m, indicating they were ready with much improved timings for the relay.
When analyzing the last seven Asian Junior Athletic Championships, this team was in the medal range for four of them, while being in the Gold medal range of the 2012 edition. Also, with the fastest 100m runner Amasha de Silva already included in the 4x400m relay team, only four more athletes were needed to make up the 4x100m relay team.
Although the AASL hide behind the selection criteria, the real reason for omission was money. According to the circular sent by the Japanese Athletic Association, participating countries have to pay US$ 200 per person per day when a country exceeds the quota given by the organizers and decides to send more athletes for the championship. The quota given for the Sri Lanka team is six but with 13 athletes and officials SL’s quota has already exceeded by 10 and inclusion of four more girls means the cost will increase further, where AASL had decide to cut down the team.
There was several private organizations who came forward to sponsor the team but AASL did not accept the fact that they are excluding the team due to extra cost.
Also, there’s is a believe that strong objections against behaviour of discarded team manager Anil Weerasinghe, by members of the relay team may have resulted in their omission.
Some members of the girls relay team cut out their names from the list supporting the previous manager and also came forward to testify in the inquiry which followed which resulted in the omission of the manager for the Asian Juniors. Since the said manager is AASL management favourite there’s strong doubt that it may have resulted in overlooking of the relay team for the championship.