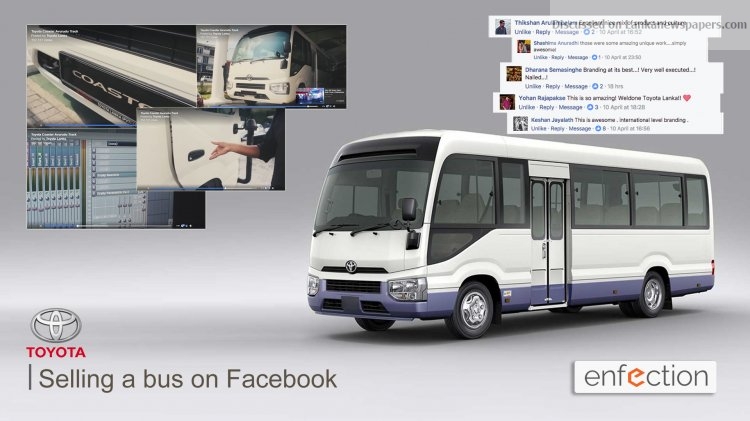 What does a Toyota Coaster bus, a rabana and Facebook have in common? Nothing at all, you might say, but this group of talented go-getters managed to take elements out of all these three (rather incongruous) factors to create some pretty out-of-the-box digital content.

Meet Enfection, the company behind the smoke and mirrors of some amazing digital marketing stories. They are a diverse collaboration of instigators, innovators, pacesetters, creators and most importantly, story-tellers. They tell your tale, push your brand into the spotlight, and make sure it is more than just a couple of blips on the online radar. And the beauty of it all? The progress of your campaign is made visible to you right throughout, so you can keep tabs on its growth and actually grasp the impact it has created.

We have reviewed three Enfection case studies here. One speaks of a bus. One is about friendly digital boosts for deserving businesses. The other is about an insight-driven niche B2B LinkedIn conquest.

A bus. Pretty everyday right? No one looks twice at a bus (unless you want to get on it) and even if the bus in question is a shiny new Toyota Coaster, it definitely does not have any attractive characteristics which would warrant online attention.

The protagonist of this story was a bus which Toyota Lanka was planning to launch, and they wanted the word out there. Enfection took up the challenge, identified the target audience, and then came to the crucial question:

How Can You Turn A Bus Into A Local Internet Superstar?

Avurudu was around the corner, and they knew that most brands would now be scrambling to capitalize on the air of festivity by churning out costly Avurudu-related advertisements, memes, and applications. Enfection wanted to create something that stepped off the beaten track but at the same time connected with the festivities as well as the potential influencers of the buying journey (immediate family and support and work network of the bus owners) without burning holes in anyone’s wallet. And this is where the rabana we spoke of at the beginning comes in.

Enfection created a catchy EDM raban tune using actual sound bytes made by the bus itself (like the signal-light clicks and the slamming of the bus door). They then put together a video which combined ‘making of’ clips with footage of the actual bus- all without using any high-profile video equipment- managing to showcase the product in a way that was both fun and practical at the same time.

The result: instant online gold, which you can check out right here.

The Art Of Transmedia Storytelling

This tale is about the creation of Sri Lanka’s first ever social media driven SMB (Small and Medium Business) storytelling platform and digital campaign.

Citizens Development Business (CDB), which is a part of Enfection’s belief network felt that they would like to do their bit by giving a helping hand to local SMBs which would profit by a leg-up. After some brainstorming at the drawing board, Enfection came up with the ideal concept: #CDBSMBFriday, a movement created to empower SMBs with a valuable digital boost which could grant them greater growth and much-needed visibility.

Every Friday saw CDB spotlighting a different business by creating and releasing a free video about it. Free Facebook credits were also thrown in, which as predicted, generated a sort of social trigger- soon other SMBs wanted their story told as well, thus expanding the platform. To date, a diverse range of small and medium businesses like Creative Play, Red Dot Geek, and Colombo Street Art have seen their stories travel wider and further with #CDBSMBFriday.

And the story does not end there; this is also one of the very few instances when a digital concept has been amplified and is now entering the ‘offline world.’ For instance, CDB recently took over a section of Eat Street Colombo and provided this space free of charge to some selected SMBs. To read more about this, please click here.

Conquering Competition By Connecting With Them

Sounds rather paradoxical, but it happened. This story begins with management consulting firm Stax Inc. looking for a way to position themselves in front of enterprise C-Levels as the no-brainer choice when it comes to strategy consulting.

Enfection set about leaping the hurdle by capitalizing on two ground realities: first, that most CXOs, despite being actively competitive, were also connected (especially on LinkedIn), and second, that they also highly respected and appreciated each other’s opinions and conquests by providing social recognition online. The solution: to create CXO testimonial content on LinkedIn as a sort of beacon to draw the attention of potential clients to their successes stories. Whilst the content were doing the rounds on Linkedin, Enfection tactically converted the leads and managed to create a steady pipeline of C-level leads for Stax.

These are just three of the many stories Enfection has created since their inception a year ago. All of them are different. So what do these stories tell us about their crafter?

Enfection generates actionable insights and enables clients to move away from vanity metrics, helping companies and brands overthrow, overcome and sometimes override buzzwords and digital fears. Here’s the thing; clicks, shares and traffic are great, but those five thousand likes on Facebook are not really going to move the needle of your business anywhere. So Enfection listens, collaborates, creates and executes through actionable insight-driven creative marketing strategies. To put it in a nutshell, they create content that cuts through digital noise and puts you, a part of their belief system, in the spotlight.

Do you want your story pushed out there? Just give them a shout.