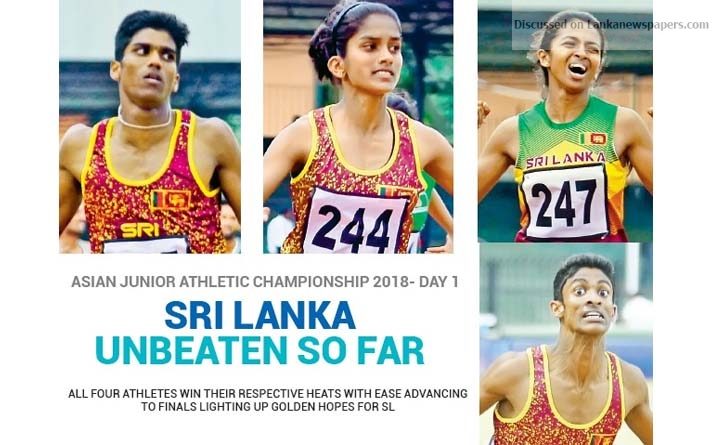 Sri Lanka finished the day unbeaten with the four competing athletes winning their heats easily, increasing hopes of winning Gold medals at the Asian Junior Athletic Championship which got underway at Nagaragwa Stadium at Gifu in Japan yesterday.
Quarter miler Dilshi Kumarasinghe from A. Rathnayaka CC Walala, started the competition for Sri Lanka by winning her heat with ease. The South Asian Junior Gold medallist who was competing in the second heat of the 400m girls’ event clocked 54.82 seconds running with just her shadow in the last 100m.
Dilshi will compete in the 400m final which will be worked off at 12 noon today. Her main opposition will be Indian Olympian Jisna Mathew.
Young sprinter Amasha de Silva hailing from Swarnamali GC Kandy lit up the course for a rare medal in the 100m as she clocked a personal best 11.80 seconds winning her heat and advancing to the final as the fastest runner. It’s been 24 years since a Sri Lankan female athlete won a 100m medal at the Asian Junior, where Damayanthi Dharsha and Susanthika Jayasinghe sealed Gold and Silver medals in 1994. Amasha will now compete in the final at 1.55 p.m. SL time, trying to match the performance Sri Lankans achieved in 1994.
The two men’s 400m runners, Aruna Darshana and Pasindu Kodikara, are in the spotlight to win Gold and Silver medals for Sri Lanka after winning heats one and three. Pasindu the South Asian 400m hurdles Gold and 400m Silver medallist hailing from Maliyadeva College Kurunegala, clocked a relaxed 47.94 seconds to win heat one.

Aruna the triple Gold medallist (200m, 400, 4x400m) at the South Asian Juniors, hailing from Weerakeppetipola NS Akuramboda, then jogged his way to win the third heat managing a sub 47 seconds performance (46.89 seconds). The pair will now compete in the final which will be worked off at 12.10 p.m. SL time.