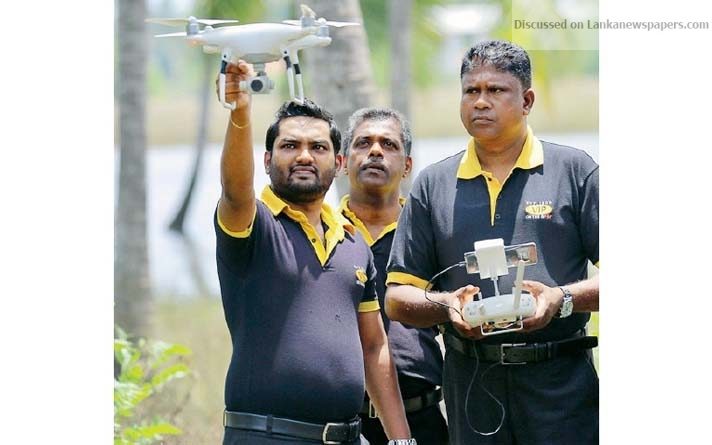 Ceylinco General Insurance became the first insurance company in Sri Lanka to use drones to inspect locations still under water in order to settle claims speedily, enabling its customers to return to normalcy in the shortest possible time.  Staff of Ceylinco General Insurance acted promptly to pay compensation to all of its policy holders with flood cover within 10 days, fulfilling its promise of swift settlement of claims.

Accordingly, claims were paid to flood- damaged vehicles, warehouses, go-downs, shops, offices, factories, construction sites and to home owners numbering several hundreds, a media release stated.
Staff members of Ceylinco General Insurance visited each and every location affected by the recent floods.  The areas they could not reach due to flood waters not having receded were inspected by sending a drone from the furthest place that they could travel.  “By sending a drone, we can determine the extent of damage then and there, without waiting for flood waters to recede. This saved a lot of time and we were able to compensate some of our customers who were affected by the floods even before the flood waters receded,” a staff member said.
Several individuals affected by the floods expressed their gratitude to Ceylinco General Insurance for the prompt action taken to pay compensation in such a speedy manner.  M. C.M. Ajwad, Proprietor of Faumia Rice Products in Wennappuwa, said that his claim  was paid no sooner his estimate was submitted and that he was able to restart his business  within a few days due to the  prompt settlement of his claim.   Similarly, E. M. Thilakasena of Shanthi Batteries, Kuliyapitiya said that he was surprised to see staff of Ceylinco General Insurance’s Kuliyapitiya  branch inspecting claims whilst water levels were still about 2-3 feet high and expressed his gratitude for the swift settlement of his claim.
Patrick Alwis, MD of Ceylinco General Insurance said, “This is the third year in a row that our country experienced floods during the same period of the year. Whenever our customers are affected, we always compensate them within the shortest possible time.

For us, this is in line with our values – to stand by our customers in their time of their need. Also, we always give prior notice to our customers regarding safety measures that they could follow to minimize the damage. Our large network of in-house risk engineers based islandwide helped us to settle claims within no time at all.  Also, we have comprehensively covered ourselves to face the challenges posed by such disasters. We have taken every precaution through proper reinsurance arrangements since we are backed by world’s best reinsurers.  Our catastrophic risks are comprehensively covered through a NAT CAT cover from a world-renowned AA rated reinsurer.”
In 2016, Ceylinco General Insurance announced a comprehensive Natural Disaster cover for Traders and Home Owners to cover their properties, including buildings and the stocks of traders; and in the case of home owners, to insure their homes and valuable contents. Through ‘Ceylinco Traders Disaster Relief Insurance’ and ‘Ceylinco  Home Owners  Disaster Relief Insurance’,  loss or damage to the insured property due to Floods, Tsunamis, Earthquakes,  Storms, Cyclones, Tidal Waves,  Tornadoes, Hurricanes,  Typhoons, Thunderstorms,  Hailstorms and Windstorms are covered, in addition to a host of other covers, the media release concluded.