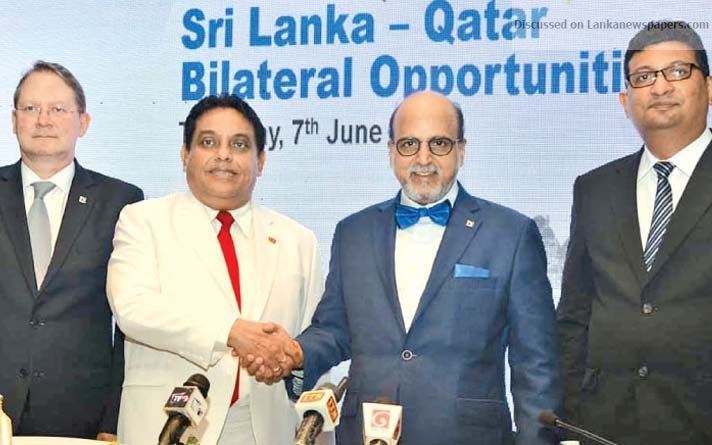 Speaking at a press conference in Colombo yesterday he said that they too saw this potential and decided to open a representative office in Sri Lanka.

“Many Qatari and GCC businessmen are planning to enter the growing Sri Lankan market ever since peace was restored,” He said with the opening of this office they could promote inter regional trade through their globe banking network.

The bank is also working to organise several business-to-business and business-to-government meeting to discuss joint ventures.

He also said that Doha Bank is the first bank from the Gulf region to open in Sri Lanka and there are similar investments to follow. He said the US$ 400 million credit line is currently available and this too will be increased in the future.

“We want to create a good brand image and then we will open a regional office in Sri Lanka.”

Commenting on the economic sanctions imposed in Qatar he said that the country has now got over it and they are implementing a different model. “Our Doing Business Index too has improved.”

In Sri Lanka too, total foreign ownership is permitted for investment in most of the areas of the economy and there is no restriction on foreign exchange transactions relating to current account payments. This too is a major plus point for foreign investors.

He said that the current trade volumes of both Sri Lanka and Qatar are very low and is less than US$ 90 million. In contrast Indian ($1billion) and Bangladesh ($1.5 million) trade volumes are very high. “These sanctions have given a good opportunity for Sri Lankans to take advantage of relax rules and regulations to invest in Qatar.”

Meanwhile Ambassador to Sri Lanka in Qatar A.S.P. Liyanage too endorsing this said that this is the time to begin business ventures with Qatar as their investment landscape is very attractive.

He said that he was happy that he too could also play a major role to facilitate the opening of the Doha Bank in Colombo. He said that he also negotiated for the LULU group in the Gulf to open in Sri Lanka and soon they will launch a major farmer fruit and vegetable buyback programme.