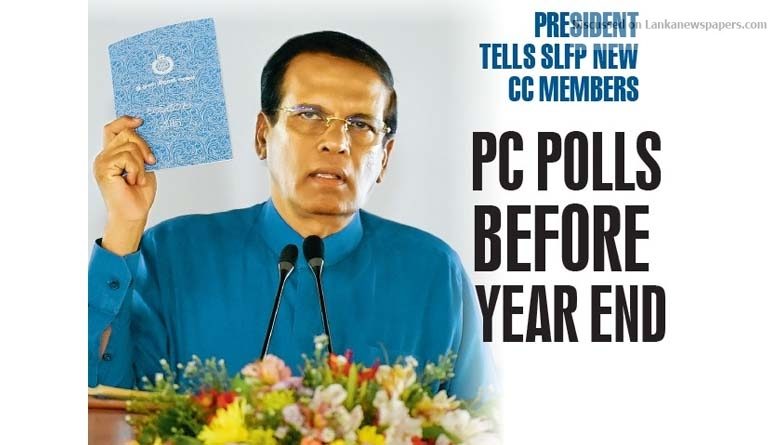 Provincial Council elections will be held before the end of the year, President Maithripala Sirisena had said yesterday. He was addressing newly appointed member to the Central Committee of the Sri Lanka Freedom Party (SLFP) at the Ape Gama centre.

Confirming this, the new General Secretary of the Party, Professor Rohana Lakshman Piyadasa added that the SLFP will work tirelessly to rebuild the Party to face elections.
Last week Election Commission Chairman Mahinda Deshapriya stated that he had written to several political parties and President Sirisena, Prime Minister Ranil Wickremesinghe and Speaker Karu Jayasuriya urging them to expedite the holding of Provincial Council elections.
Deshapriya, in April this year, said the Government had four options to hold the Provincial Council elections. The first option was to approve the current delimitation report.
The second option was to revise the delimitation report through a committee appointed by the Prime Minister. He said if there was a need to change the 50:50 Preferential and First-past-the-post systems, the Government would have to go for a fresh delimitation report where a two-thirds majority in Parliament would be needed to pass the report.

Deshapriya said the fourth option would be to completely switch to the old system, which must be done through Parliament.