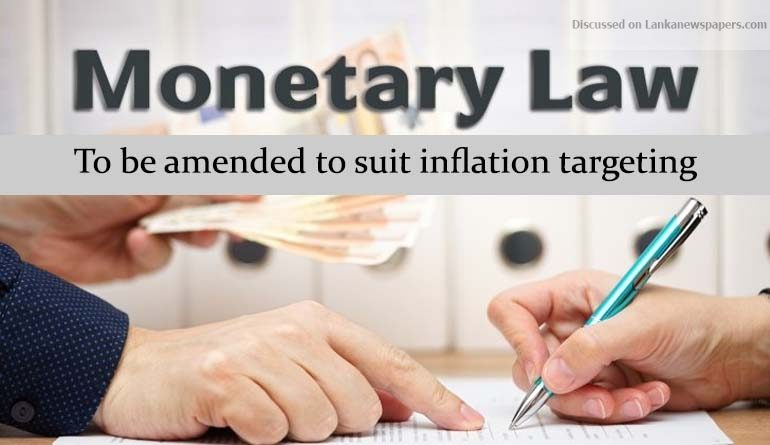 Amendments to the Monetary Law Act (MLA) is to be present to Parliament next year to suit the Flexible Inflation Targeting (FIT) frame-work with the aim of maintaining 4-6 per cent inflation a year from 2020, Central Bank (CB) officials said.

These amendments are now being drafted and it would include strengthening the mandate of price stability, separating the monetary and fiscal functions, strengthening the CB’s autonomy, and introducing institutional arrangements for setting inflation targets and maintaining accountability, CB Senior Deputy Governor Dr. Nandalal Weerasinghe said.

The FIT frame-work will come into operation as a fulfillment of the commitment made by the government in receiving the IMF Extended Fund Facility (EFF), he said adding that several economic reforms including the enactment of the Inland Revenue Act and fuel pricing formula have been implemented towards this end.

Cabinet approval to amend the MLA has been obtained in April 2018 with the view of improving Central Bank’s governance and strengthening its independence while facilitating the adoption of FIT, CB’s Additional Director, Dr. C. Amarasekera told journalists and media personnel in Colombo on Friday.

Addressing an awareness programme on flexible inflation targeting frame work, he noted that the new amendment will help to strengthen the financial sector oversight.

He disclosed that the new amendment provides provisions to streamline powers of the Central Bank with regard to exchange rate management and facilitate an intervention strategy in the foreign exchange market.