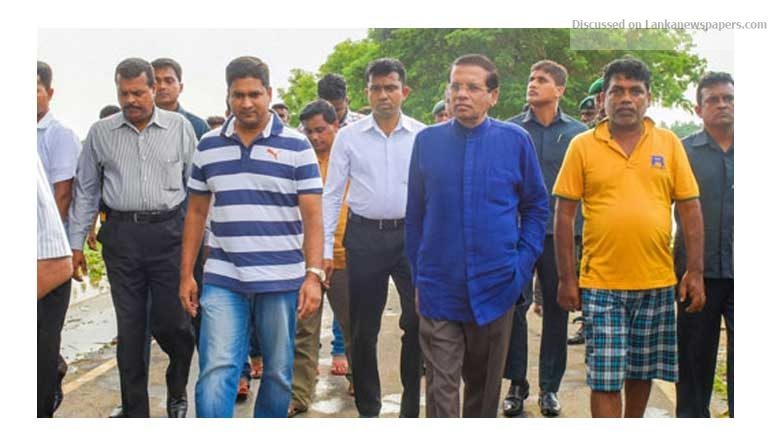 President Maithripala Sirisena Sunday visited the flood-hit Chilaw area in the northwest to observe the relief services provided to the people affected by the floods.

The President met with the political representatives and state officials in the area at the Mahawewa Divisional Secretariat office and inquired about the relief arrangements for the people.

President Sirisena advising the officials to continue the welfare programs implemented for the displaced people, gave instructions to properly carry out the operations to rescue the disaster-hit people with the assistance of the tri-forces.

The President emphasized that the Government has implemented the relief measures in two phases and will take measures with great responsibility to provide relief during the disaster as well as to implement programs after the disaster for the well-being of the people.

The President also instructed the officials to carry out a special relief program for the retired public servants and public sector employees in the lower grades who were affected by the disastrous weather. He stressed that the officials should not be restricted by circulars when implementing relief measures and should make decisions and take measures according to the needs of the affected people.

The people of the area also briefed the President on the damage caused to their livelihood due to the sudden disaster situation and urged the President to assist them in obtaining loans under a concessionary program to rebuild their livelihoods. The President focusing his attention on the people’s request instructed the officials to submit a report with the necessary information to him.

President Sirisena commending the state officials and the members of the security forces for their service to the affected, expressed his sympathies for the police officer who disappeared in floods while attempting to save a group of stranded people. The President also instructed the officials to promptly look into measures needed to be taken for the welfare of the missing officer’s family. The President also inspected the Medagoda Bridge that was sunk due to floods.

Meeting with the people in the area, the President inquired into their problems and pledged to promptly take measures to repair the Bridge.

Later, the President visited the Nattandiya Sri Pushparama Viharaya, where about 250 displaced people from 40 families were accommodated, and looked into their needs.