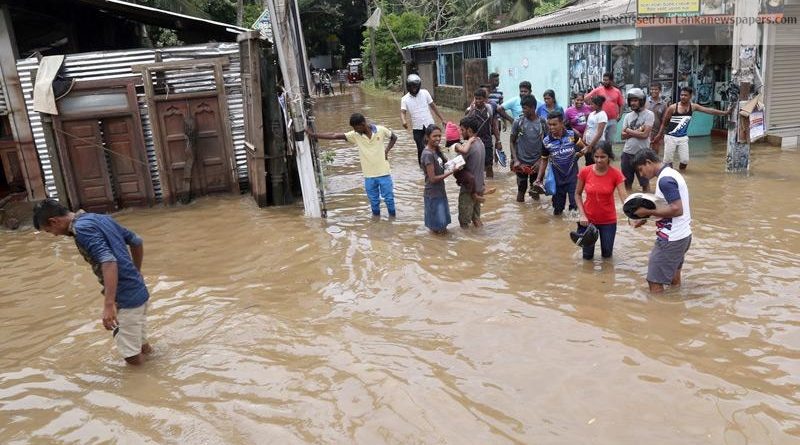 “There is no specific allocation as such but all uninsured houses and small business premises are covered by the National Natural Disaster Insurance Scheme (NNDIS) which is operated by NITF,” de Silva said.

The NITF pays Rs. 100,000 for every life lost and compensation for damaged houses and business premises are made after assessing the damage.

“If the damage is minor, Divisional Secretaries and Grama Niladharis are empowered to pay up to Rs. 10,000. If the damage is estimated to be more, an advance of Rs.10,000 will be paid. These payments will be made within this week. We have already released Rs. 25 million for this purpose and further funds will be released as and when required,” the NITF chief said.

With regard to the scale of the damage he said a final estimate cannot be made as the country is yet in the midst of a situation which could develop further causing more damage to life and property. Hence, it is a bit too early to judge the scale of the disaster.

However, according to de Silva it is unlikely that it will reach those levels this time unless there is a serious escalation of rain during the next few days resulting in more floods and landslides.

With regard to the time taken to asses and make payments for claims de Silva said after the initial phase of settling minor claims below Rs. 10,000 and advances, the assessment of damages to houses will commence. This will be done by an assessment team that includes the relevant Grama Niladhari, other local officials such as NDRS Officers, Technical Officers, Economic Development Officers, etc along with a representative from NITF.

The assessments should be completed within four weeks and all payments below Rs. 25,000 can be paid within six weeks (two weeks after assessment). Payments above Rs. 25,000 will need further verification and will be paid within eight weeks (four weeks after assessment). So, basically within two months, we should be able to settle all the claims. Insurance Association of Sri Lanka General Insurance Forum Chairman Anuradha Siriwardane said General Insurance companies have already deployed loss adjusters and motor assessors to assess the damages.

“We have already settled claims or have made offers for customers who have submitted the required information to us. However, it is too early to comment on the exact figures we are still receiving claims from customers,” he said. Siriwardane said unlike assessing the damage to property which is complicated assessment of damage to motor vehicles is straight forward and could be made easily.

However, he said the time to settle claims for motor vehicles depend on the extent of the damage and the time taken to repair and on property settlement of claims depend on how fast the claimants could submit estimates and the documents to the company. With regard to the numbers individual companies report claim details to the NITF. Companies have already made settlements or offers to minor damages to dwellings.

Most householders insure their property as a requirement the mortgage agreement and the insurance cover is only up to the mortgage value. Insurance policy requirement is to insure property on the re-investment value. However, on sympathy grounds some insurance companies go the extra mile and pay beyond the amount.

“The challenge this year for insurance providers is to rearrange reinsurance. If natural disasters keep recurring frequently there may be a possibility that reinsurers will impose strict terms and conditions or withdraw from the market,” Siriwardane said.