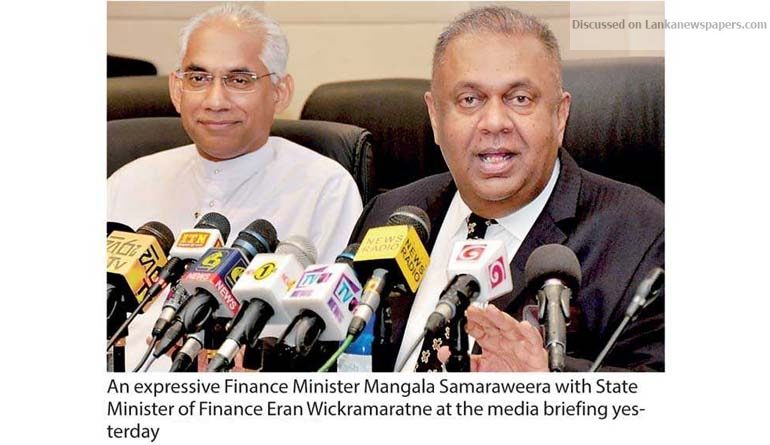 Marking his first year, Finance Minister Mangala Samaraweera yesterday assured that the macroeconomic stabilisation efforts of the Government had been successful, and assured additional efforts were underway to put the country on a stronger growth footing.

Addressing a special media briefing held at the ministry, he pointed out that within the past year the Government had not only reduced the prices of essential goods but had now established the right fundamentals to promote growth over the next two years. In an attempt to defend the Government’s performance, the Finance Minister also challenged former president Mahinda Rajapaksa to an open debate on TV over the economy.

He noted that for the first time since 1992 the Government in 2017 had recorded an excess in the primary account and expected it to increase in the medium term. Pointing out that the current account had also recorded an excess, Samaraweera was optimistic the government could cover all recurrent expenditures from government revenue this year.

“The inflation is now at 1.6%, which is a 15-month low. The national savings increased to a record level of 33.9% in 2017, while the national investment too increased to 36.5%,” he added. The Minister also highlighted that Sri Lanka has now reached an upper middle income country level, with per capita income of $ 4,065 in 2017.

In terms of the external economy, Samaraweera said by the end of last year the country had $ 8 billion in reserves, sufficient for six months of imports; while asserting that there was an excess of $ 2.1 billion in Balance of Payment (BOP) last year. The Foreign Direct Investments (FDIs) recorded a historic high of $ 1.9 billion, while also posting a historic high of $ 11.4 billion in export revenue. Tourist arrivals also increased by 21%.

He emphasised the fact that the Budget had allocated a significant amount of funds for essential services such as education, health and housing, noting that the funds allocated for these services have been increased on an annual basis.

He said the Rs. 55.8 billion revenue saved through the introduction of the pricing formula would be utilised to launch the Enterprise Sri Lanka Loan Scheme on 22 June in Colombo under the patronage of President Maithripala Sirisena and Prime Minister Ranil Wickremesinghe, while the Enterprise Sri Lanka Mega Exhibition will be held in August in Embilipitiya with the announcement of the rapid village development program ‘Gamperaliya’.

The Finance Minister disputed the assertions and figures of former President and Kurunegala District MP Mahinda Rajapaksa produced at various forums, adding that he was misleading the general public with false information.

Giving a breakdown of Sri Lanka’s debt repayments over the next three years, Samaraweera stressed that the majority of the settlements were for loans obtained prior to 2015.

He said around 72% of the debt in 2030 comprised loans obtained by the Rajapaksa regime.

“For the next 12 years we have to pay a higher percentage of funds for the loans obtained by Rajapaksa and his crooks,” he added.

“This opening of a record number of new tax files is a reflection that the general public has recognised it as a social obligation and not a responsibility. They have come forward to pay their due taxes as responsible citizens,” he told journalists in Colombo yesterday.