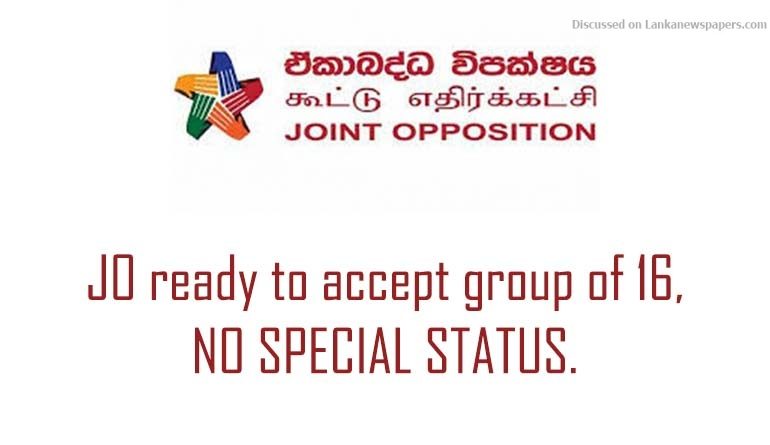 The Joint Opposition (JO)/Sri Lanka Podujana Peramuna (SLPP) expect 16 SLFP members of parliament who crossed over to the Opposition on May 8 to join the genuine Opposition without further delay.

Authoritative JO/SLPP sources told The Island that there was consensus among JO and SLPP heavyweights that the group of 16 could join JO led by former President Mahinda Rajapaksa.MEP leader and Colombo District MP Dinesh Gunawardena functions as the JO parliamentary group leader.

Responding to a query, a senior SLPP official emphasised that there hadn’t been structured talks between the JO/SLPP and the group of 16 since the split in the 41 member UPFA parliamentary group loyal to President Maithripala Sirisena on April 4 over the No Confidence Motion (NCM) against PM Wickremesinghe.

Of the 41 MPs comprising 39 SLFP and 2 CWC, 16 voted against PM Wickremesinghe while the rest abstained.

Former Petroleum Resources Minister attorney-at-law Chandima Weerakkody yesterday told The Island that it would be pertinent to mention that none of those 41 members voted against the NCM moved by the JO against Wickremesinghe over his alleged involvement in treasury bond scams in 2015 and 2016 and the failure on his part as the then Minister of Law and Order to contain recent ethnic violence in Ampara and Kandy.

Acknowledging the group of 16 hadn’t formally joined the JO yet, Galle District MP Weerakkody said that the outfit wouldn’t help the UNP-led government in anyway. Weerakkody said that their group would seek consensus with the SLFP group still in the government and the JO members as regards crucial matters such as the proposed 20 Amendment to the Constitution meant to further clip presidential powers.

Weerakkody compared their current efforts with all members elected and appointed on the UPFA ticket, except retired Rear Admiral, voting for the 19th Amendment to the Constitution in April 2015. The MP assured that the group wouldn’t under any circumstances come to the rescue of the government though a section of the elected and appointed SLFP members remained in the administration.

Responding to a query, Weerakkody said that the public detested the government as since coming to power in January 2015 it had failed to halt the rapid deterioration of the national economy. Weerakkody said that irreparable damage had been caused to key sectors with them in turmoil.

Weerakkody said that of those 23 members in the government at present, perhaps six or seven were likely to switch their allegiance to the UNP.

Asked whether they had chosen a leader for their 16-member parliamentary group, Weerakkody said ‘No.’

“We’ll work closely with the JO on all critical matters. We are constantly in touch with them,” Weerakkody said.

He said that having voted against the NCM, thereby coming to the rescue of PM Wickremesinghe, the TNA had no moral right to sit in the Opposition. Wouldn’t it be better if the TNA joined the government and secured at least one cabinet portfolio for an MP representing northern or an eastern district. Those who had insisted that SLFPers who voted for the NCM shouldn’t remain in the government didn’t find fault with the TNA for blatantly betraying the people.