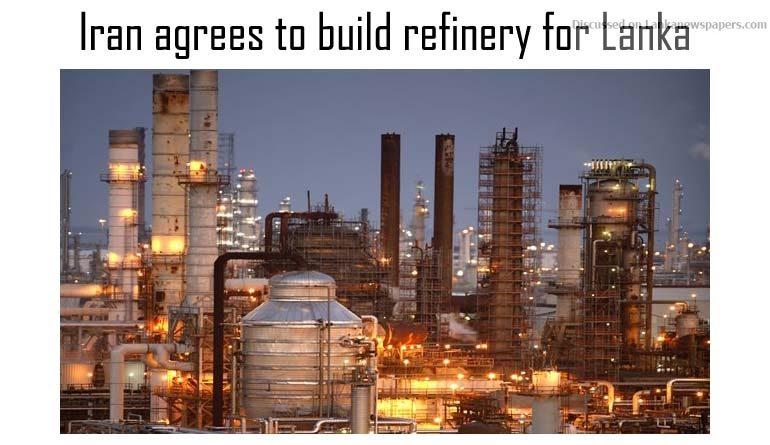 Iran has agreed to build a new oil refinery for Sri Lanka in addition to upgrading its ageing 50,000 barrel per day (bpd) state-owned refinery, Sri Lankan Cabinet spokesman Rajitha Senaratne said yesterday. Iranian officials pledged the new refinery when Sri Lanka President Maithripala Sirisena made an official visit to Tehran over the weekend, the first leader to go to Iran since US President Donald Trump reimposed US economic sanctions.
“They even agreed to help Sri Lanka to build a new refinery,” Senaratne told Reuters when asked if Sri Lanka sought assistance to refurbish its current refinery.

“We only spoke about the concepts and they promised to send a team (for further talks).”

Senaratne did not elaborate how the Sri Lankan government would deal with Iranian financial transactions in the face of US sanctions.
Sri Lanka has a single, 50,000 bpd oil refinery in Colombo suburb Sapugaskanda, built by Iran in 1969 to refine Iranian light crude. However, when toughened sanctions were imposed on Tehran in 2012 to curb its nuclear ambitions, state-run Ceylon Petroleum Corporation (CPC) was forced to look for other light crudes.
The existing refinery accounts for 30% of Sri Lanka’s fuel requirement, but the head of CPC last week said that upgrading “may not be the solution” because Sri Lanka needs a refinery capable of handling all types of crude.
Iran’s offer comes as Chinese, Middle East and Russian companies are in “preliminary discussions” to build a 100,000 bpd refinery for CPC.
Two Chinese companies have jointly bid for a 100,000 bpd refinery, with annual output of about 5mn tonnes a year, in the southern town of Hambantota, where China controls a sea port and plans an industrial zone.
Sri Lanka is still in talks about the Hambantota refinery, though the government has blocked a proposal by the Chinese companies to sell fuel locally.
Sri Lanka has also discussed another 100,000 bpd refinery in partnership with Indian Oil Corp, but there has been no progress on that plan.