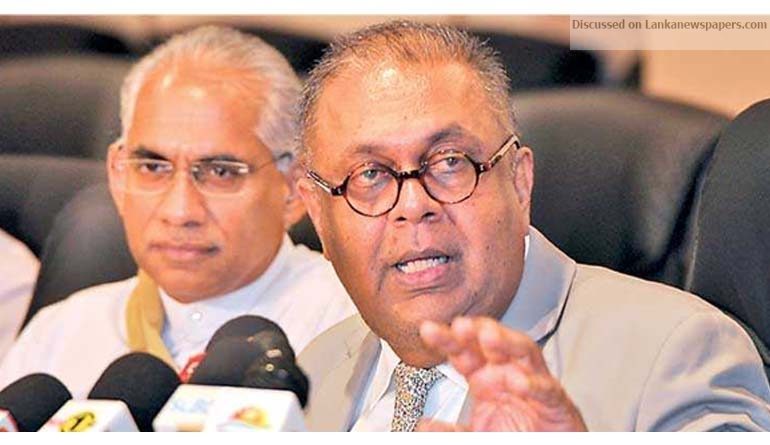 Fuel prices were hiked yesterday in tandem with global spikes with the Government deciding to opt for a bi-monthly review in line with international prices to make the debt-ridden Ceylon Petroleum Cooperation financially viable and reduce impact on the economy.

Finance Minister Mangala Samaraweera told journalists yesterday that on the fifth day of every second month, the prices will be adjusted and announced according to the formula using Platts Singapore benchmark prices.

He also said that one of the reasons they implemented the formula was to alleviate any petrol stations keeping large stocks of fuel without distributing it to the consumers.

The Minister claimed the benefits of the fuel price subsidies were disproportionately enjoyed by the rich. Attributing to the latest household income and expenditure survey, he said it was estimated that the richest 10% of the population enjoys 31% of the benefits of the subsidised fuel prices.

When asked if Lanka IOC would also increase prices, the Treasury Secretary Dr.R.H.S. Samaratunga said, as a private company, they have the liberty to adjust prices accordingly.

The officials conceded there would be substantial increases in costs of transport, food and electricity as a ripple effect of the formula. Samaraweeraargued that as the Government has maintained a low inflation rate of 3% this year, the price shocks could be absorbed by consumers.

State Finance Minister Eran Wickramaratne said the introduction of the pricing formula will allow the consumer to have a better understanding of how the prices are reflected in the world market.

“Just as an increase is reflected in the pricing formula, the decrease will also be reflected. This will enable the consumer to better manage their finances in a household,” he added.

According to the forecast, Samaraweera noted that fuel prices are expected to reduce in the first quarter of 2019.

However, raising concerns is the situation in Iran where US President Donald Trump has pulled out a deal to limit Iran’s nuclear weapons program, raising the threat of sanctions that could hit oil production. Forecasts indicate oil prices may hit $80 a barrel. “When we did the pricing formula, a barrel of oil was $74.75 but when we checked it today, it had gone up to $77,” he stated.

The pricing formula for fuel was structured considering two variables: price of an oil barrel at $75 and the foreign exchange rate (US dollar) at Rs. 155. Wickramaratne said the total taxes includes excise, import duties and port levies of around Rs. 58.8 per litre of petrol, but it is lower than other countries in the region.

Samaraweera denied any allegations that the formula was implemented because of the conditions made by the International Monetary Fund (IMF). “If someone is saying that we did it because the IMF came up with a deadline and there was a condition, it is unfair. We did it for the benefit of the people of this country and for the economy. It is a good decision,” he added.

He said the revenue loss under the older pricing formula was of Rs. 55.8 billion per annum, which is equivalent to the annual budgetary allocation for the Agriculture Ministry. The CPC had lost Rs. 11.3 billion during the first three months of this year because there was no price adjustment.

Noting that the introduction of formula will not help the institute to breakeven, he suggested that the CPC needs to be restructured and that they were in discussion with the Petroleum Resources Development Ministry. “To make CPC profitable, it needs to be restructured. There is no mechanism to do so at the moment, but this must be discussed with the Minister,” he added.

Finance Minister said a major portion of the Rs. 55.8 billion saving from the introduction of the formula will be used for the rapid village development program, ‘Gamperaliya’, in August.

“We hope to provide nearly Rs. 168 million per Divisional Secretariat to develop roads in villages, replenishing around 22,000 small reservoirs, setting up ‘green parks’ which includes a gymnasium, meditation centre, library and free wifi for the villagers. In addition, we hope to renovate small village temples,” he stated.