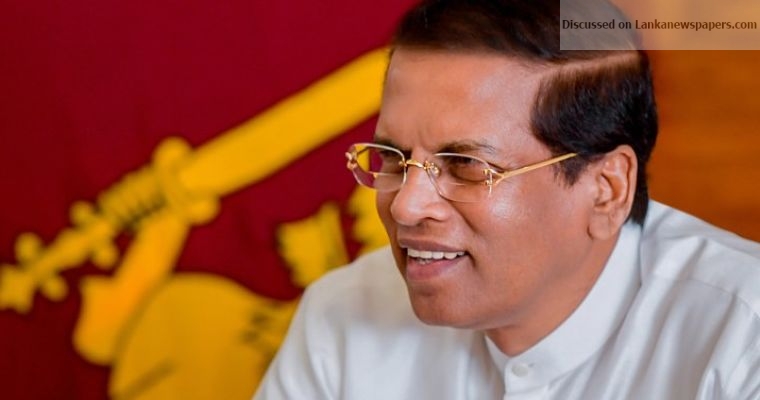 President Maithripala Sirisena today declared that he would not retire from politics in 2020 as he had to complete his mission to serve the people and the country beyond 2020.

Addressing the SLFP May Day rally at the Chenkalady Sports Grounds in Batticaloa this afternoon, President Sirisena went on to say that the media and many others kept asking him whether he would quit politics in 2020.

“I would like to tell all of them that I have a mission and vision for the people and country beyond 2020 and I would retire only after I accomplish them successfully” President Sirisena stressed.

There are politicians who are dreaming of coming to power by hook or by crook. By murders, frauds, embezzlement and other financial crimes? The country and people don’t want these murderers, fraudsters, thieves and criminals as their leaders in whatever masquerades they come before the people. The people want leaders who love the country and the people. There are so many who are dreaming of forming governments in 2020. They are in a fantasy world because they have no plan, strategy or vision to develop the country and strengthen inter-communal harmony and reconciliation. The SLFP has a clear-cut plan, strategy and vision on how to achieve economic progress and reconciliation by 2025. The SLFP is ready to launch this journey with like-minded people, political parties and trade unions who are concerned for the welfare of the country and reconciliation, President Sirisena said and added he would invite all academics, professionals and all other patriots to join hands with him in this noble mission of making Sri Lanka a prosperous and peaceful country.

President Sirisena said politicians tell fairy tales more often than not to hoodwink the people to fulfil their political agenda. They must have a solution to solve problems faced by Buddhists, Hindus, Muslims and Christians. Clean and honourable politics means finding solutions of all communities living in Sri Lanka. The SLFP has this quality and politicians who are capable of allaying the fears and sorrows of the people, he added.

President Sirisena pointed out that the post-war Sri Lanka has failed to exploit the benefits of peace even after 10 years since the obliteration of the LTTE. The post-war peace has been used only to promote inter-communal mistrust, suspicion and racial disunity for political gains. There are politicians who believe that they could survive only by promoting and spreading racial disunity and communal misunderstanding forever. But the policy of the government and the SLFP is that the country can be developed and prosperity of the people can be achieved only through peace and listening and getting advice from religious leaders of Buddhism, Hinduism, Islam and Christianity.

Politicians must realize that conflict resolution and provide relief to people cannot be done through war or the gun. It can be done only through dialogue, mutual respect and human love. The politician must always be honest, open-minded and without hidden agendas. The crooked politicians say many things and give many promises to people to come to power. They show a dreamland with divine pleasure and joy to the people. But they never say that those fantasy tales would never solve people’s problems.

President Sirisena pointed out that those politicians and political parties who are talking of 2020 elections have failed to put before the people their plan for the development of the country and reconciliation, unity and inter-communal harmony and added that it was only the SLFP that has come forward with a strategy and plan to develop Sri Lanka while promoting racial harmony.

They never say peace, harmony and economic prosperity cannot be achieved through these fairy tales. But sadly people get deceived by them. When they realize their mistake, they are too late, he said.

After the 30-year separatist war ended nothing significant has happened for the benefit of the people. Many ask as to what the unity government has done in the last three and half years. I would like to tell them that the unity government has transformed Sri Lanka into a civilized, decent and respected country in which all communities could live in peace and harmony. Sri Lanka is not branded as a ‘Pariah State’ anymore. This government has restored the rule of law, democracy firmly and ensured the independence of judiciary and press. The press-print and electronic-use their new found freedom to mercilessly attack the government in many instances with misinformation, fabrication absolute lies.

President Sirisena concluded by saying that the SLFP was ready to unite all progressive and patriotic politicians, political parties and trade unions under oner umbrella with a clear vision to bring sustainable peace and economic envelopment to the country beyond 2020 and made an appeal to all of them to gather under the SLFP flag to realize all of their expectations, hopes and wishes.

Parliamentarians, S.B. Dissanayake and Sumedha Jayasena, members of the rebel group comprising 6 SLFP cabinet Ministers, State and Deputy Ministers were present at the meeting occupying seats on the main stage. However, Thilanga Sumathipala and Dayasiri Jayasekara who attended the meeting were not seen on the stage.