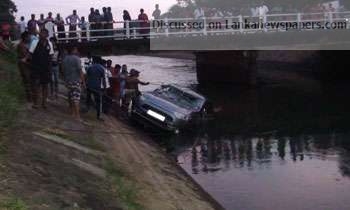 A car had been found floating in the Viyana canal in Mahiyanganaya early this morning and a resident of the area had informed the police about it.

According to the police, the car had toppled into the canal at the 17th milepost on the Badulla- Mahiyangana Road this morning.

Police said no information was reported as to whether there was any passenger in the car and search operation was underway.

It was identified that the vehicle was registered under a person from Higurakgoda.