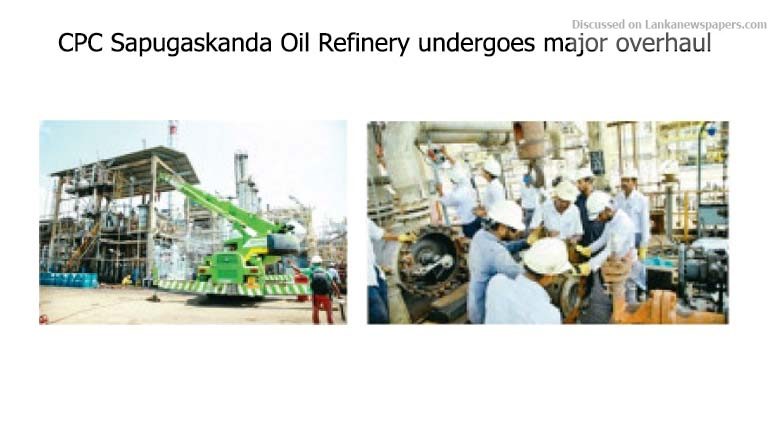 The scheduled renovation in 2018 is a procedure commissioned every 3 years that focuses on maintenance and replacing critical facilities and equipment to operate the refinery at optimum levels. The renovation project took place in the three main sections of the plant, namely the Process Plant, Utilities and the Tank Farm.

The large-scale overhaul of the refinery saw the complete shutdown of the facility. The supply gap due to the shutdown of the facility was filled by procuring imported oil by CPC, months ahead of the scheduled 2018 maintenance project.
The Sapugaskanda Oil Refinery Facility overhaul saw round-the-clock inspections, quality testing and maintenance of equipment. This year’s maintenance of the refinery importantly replaced several critical equipment in the Crude Distillation, Naphtha Hydrotreater, Reformer and Gas oil Hydrotreater units that were nearly 50 years old.

During this period, maintenance work took place in the Utilities and the Tank Farm areas.
CPC Chairman Dammika Ranatunga, commenting on the critical refinery overhaul, said, “We are committed to ensure the country’s future energy needs are met without any interruption.

We have adopted a long term strategy to uplift the quality and productivity of the Sapugaskanda Oil refinery by installing the latest high-end equipment and renovating key facilities this year. It is a very important project for us as on the long run it ensures we supply uninterrupted energy in an efficient and productive manner.

Our vision is to build and strengthen our country’s energy security. We plan to incorporate modern standards and processes to transform Sri Lanka’s energy landscape to one of the best in Asia.”

The renovation process commenced on 19 February 2018. Over 1,200 Employees including Engineers and Mechanics of the refinery worked diligently and often overtime during the 35-day period to complete renovations as per schedule.

Further, the entire renovation process was monitored closely by a quality assurance team to ensure stringent safety standards and global quality testing procedures by The American Society for Testing and Materials (ASTM) and the American Petroleum Institute (API) were followed.
Situated on a 165-acre land, the Sapugaskanda refinery currently produces 50,000 barrels per day and consists of five large oil tanks with a capacity of 40,000 metric tonnes each. The refinery imports crude oil from Middle Eastern countries such as Saudi Arabia, Oman, Abu Dhabi, etc.