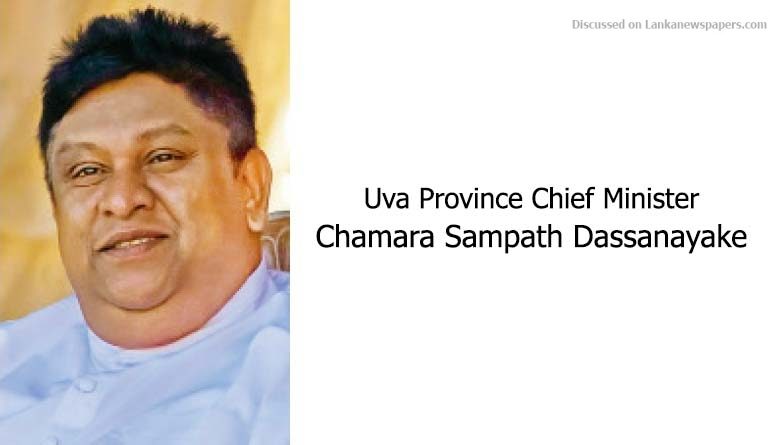 Teachers’ trade unions yesterday (16) threatened to take action against the reappointment of Uva Province Chief Minister Chamara Sampath Dassanayake, who in his capacity as the Provincial Minister of Education allegedly forced a female school principal to kneel before him.
The incident in which Dassanayake reportedly summoned the principal of the Tamil Girls’ Maha Vidyalaya, Badulla to his residence and made her kneel, because she refused to enrol a student recommended by him, created public outrage and as a result, Dassanayake had to step down as the Provincial Education Minister.
However, he had been reappointed to the post earlier this month by former Governor of the Province M.P. Jayasinghe despite the President’s instructions that the portfolio should be taken over until investigations into the alleged incident are concluded.

However, Jayasinghe was appointed as the Governor of the North Central Province on 12 April.General Secretary of the Ceylon Teachers’ Union Joseph Stalin vehemently criticized the move of the former Uva Province Governor. He further said that Dassanayake should not have been re-appointed as the Minister of Education of the Province when two separate investigations are pending against him.
“The Court case and the Human Rights Commission of Sri Lanka investigation into the alleged incident have not been concluded yet. In such a situation, it is not ethical to re-appoint Dassanayake to the post again.

This action of the former Governor proves that this Government did not have a genuine intention to punish culprits who are responsible for the incident,” Stalin stressed.He alleged that the Provincial Education Officials who had been involved in the incident are still at their posts without any action taken against them.

Justice for the principal is yet to be delivered in this regard, he added. Ceylon Today’s attempts to contact Jayasinghe were unsuccessful.