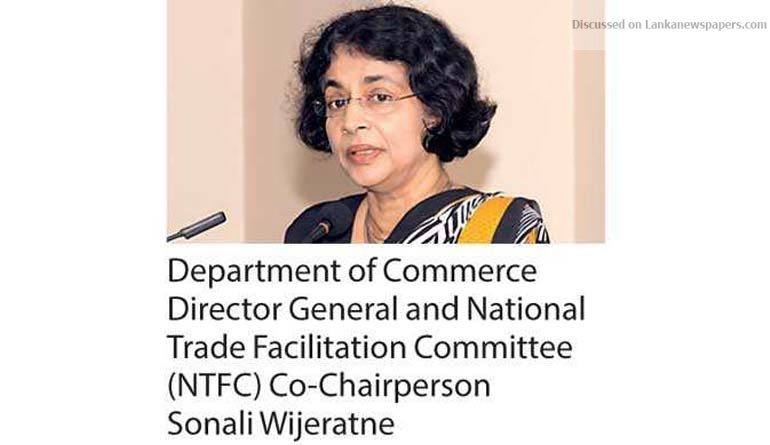 In a major boost to streamline trade, Sri Lanka expects to launch the proposed Trade Information Portal (TIP) in mid-May as 80% of the work has been completed, a senior official said.

“Almost 80% of the TIP work has been completed with the support of 55 other agencies,” the Department of Commerce Director General and National Trade Facilitation Committee (NTFC) Co-Chairperson Sonali Wijeratne said recently at the first public-private consultations on the establishment of a National Single Window (NSW) in Sri Lanka, organised by the International Trade Centre (ITC) in collaboration with NTFC.

Sri Lanka has formulated an action plan to implement the provisions of the Trade Facilitation Agreement (TFA), which has been agreed by the members of the NTFC. The project aims to deliver improved transparency, predictability and availability of trade-related information, an increased level of compliance to legislation and regulation, enhanced speed at which business may be transacted, reduced cost of doing business and reduced bureaucracy.

However, Wijeratne raised concerns over certain delays in implementing commitments, noting that it had taken almost three years for Sri Lanka to officially notify the WTO of the commitments under categories A, B and C of the TFA.

“The notification of categories A, B and C to the WTO has taken too long as I see it. Although we started this process in 2015 through the submission of a Cabinet paper to notify these three categories, the establishment of the NTFC was only in February 2018. Why is that? That is because there are procedural difficulties that have been put into the NTFC by way of concentration on form and not substance,” she pointed out.

She stressed the fact that when the country is in a mechanism relating to trade facilitation, the nodal organisations competently involved in the day-to-day operations of the regulatory regime such as all these departments and agencies should be given greater licence to proceed under the aegis of their respective ministries.

“We need to have a difference in the culture of looking at this subject of trade facilitation. This is a national effort. This is what we all are doing together. This is not something we are trying to gain some prestige over or control over. I think as soon as we have that virus of ‘we can control or possess’ in the system, it will take away the enthusiasm and all the momentum that has been there so far,” Wijeratne added.

Sri Lanka Customs Director General and NTFC Chairperson P.S.M. Charles emphasised that the implementation of the trade portal would ensure transparency and predictability in all border clearance processes.