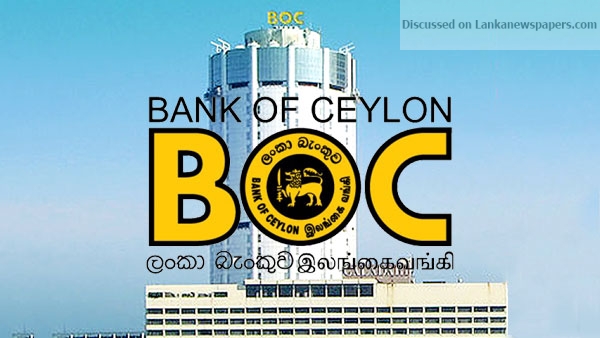 The Bank of Ceylon has ended 2017 with another spearheading record of Rs. 30.3 billion Profit Before Tax (PBT), its highest-ever PBT.

The Bank has recorded an impressive 8% growth in PBT, when adjusted for the one-off gain recorded in 2016 (i.e. disposal of Mireka Capital Lanka Ltd.). With this, BoC continues to maintain its position as the highest profit earning single entity of the country. Profit after tax for the year stood at Rs. 21.3 billion, General Manager Senarath Bandara said.

Followed by the change in policy rates, the market interest rates moved further upward and the high interest rate regime which prevailed throughout the year except for the latter part of the year in which interest rates recorded a slight slowdown.

In the midst of a subdued performance reported from the trade sector, the bank has reported a growth of its net fee and commission income due to the timely and meticulous strategies it has adopted to diversify their avenues of revenue.

Net operating income for the period reflected a marginal reduction of 4% mainly due to Rs. 4.9 billion increment reported in impairment charges. The underlying cause is the change in the base of impairment recognition due to transfer of a number of collectively impaired customers to the individually impaired category during the year and the bank adopting a more prudential approach to new accounting standards that are coming to effect in 2018.

During the year the economy was performing below the expected level and the bank also had to absorb the impact of prolonged drought which prevailed in the northern part of the island. However, the successful credit management policies adopted has enabled the bank to maintain the NPA ratio at 2.8%, as in the previous year.

The bank has been able to achieve a 9% reduction in its total operating expenses due to efficiencies achieved via many process changes introduced. Also depicting the bank’s effective cost benefit management, the cost to income ratio has come down to 38% from 43% the previous year.

The financial strength of the bank is showcased by its ability to record Rs. 30.3 billion, the highest PBT in the industry even after recognising an impairment provision of Rs.9.3 billion into its accounts. This gives a strong indication of the banks’ ability to continue its strong financial position even in midst of financial shocks which directly impact its profits.  The income tax, VAT, NBT and dividend which constitute the bank’s value to the Government coffers amounted to Rs. 28.6 billion during the period under review. This is 76% of the profit before financial VAT, NBT and taxation.

Bank of Ceylon has been, for a number of years now, the holder of the largest asset base held by any single entity in the country. This position has been further strengthened as the loans and advances figure has reached Rs 1.2 trillion and in doing so has pushed the assets base to Rs. 1.95 trillion bringing BoC closer to another significant milestone – the Rs. 2 trillion mark. This is a YoY growth of 17%.

Deposit base accounted for 84% of the bank’s liabilities as at end2017 and recorded a YoY growth of 23% to Rs. 1.5 trillion. However, 36% increase in time deposits has resulted due to industry wide move towards higher yielding deposits as a response to high interest rates which prevailed during the year.

The bank’s Return on Average Assets (ROAA) ratio stood at 1.7% and Return on Average Equity (ROAE) ratio stood at 20.9% portraying the bank’s ability to generate healthy returns for the owners despite the increased assets base over the period. The reduction in ROAE from 28.4% to 20.9% over the year has been the result of the capital infusion the bank received by the Government in the last month of the financial year. The bank aims to generate the returns from this capital in year 2018.

The bank managed to maintain a better trade-off between liquidity and interest earning assets. The bank also continued to sustain the Capital Adequacy Ratio (CAR) by maintaining the total capital of Tier I and Tier II at 14.6% level against the Central Bank’s minimum requirements of 11.75% according to the BASEL III capital requirements which came into effect from 1 July 2017. During the year the bank received Rs. 5 billion capital infusion from the Treasury, strengthening the bank’s capital base to Rs. 20 billion.

Being the trendsetter in the Sri Lankan banking industry with over 78 years’ experience, the Bank of Ceylon has become the most stable and the trusted bank in the country that serves Sri Lankans from all walks of life helping them to build their lives and make themselves financially stable and uplifting the country’s economy.

The stability of the bank is reaffirmed by the ratings of B+ Stable outlook from Fitch ratings and the B1 negative from Moody’s. The bank has also been affirmed AA+(lka) rating by Fitch Rating Lanka Ltd. During the year the bank was also showered with many accolades in recognition of its brand value, excellence in performance, annual report excellence, Human Resource Management, digital products and services and also its efforts in sustainability and CSR.

The bank won Gold awards for interbank transactions, customer convenience and financial inclusivity in the Technovation awards. The Bank of Ceylon was recognised as the Asia’s Best Employer Brand by the Employer Branding Institute – India and SLITAD People Development Silver award as well. Its economic sustainability and the economic contribution were given the highest recognition in the Ceylon Chamber of Commerce Best Corporate Citizen Sustainability Awards.

Further, the Ministry of Power and Renewable Energy recognised the excellent contribution of the bank towards their efforts on promoting solar energy. The Bank of Ceylon was given the title of ‘Leading Partner Bank for the ADB in Sri Lanka’. This is the first time a Sri Lankan bank has received such title from ADB.

During the year the bank also has took many digital initiatives such as launch of ‘B app’, the mobile banking app of the bank, issuing multi-currency travel card, re-launching the online banking facility of the bank with enhanced features to revitalise our journey towards new-era banking. Boosting its digital channels has also made it further strengthen the cyber security infrastructure of the bank and hence during the year the bank has introduced issuing EMV compliant debit cards and making the entire ATM/CDM network of the bank an EMV compliant chip card accepting network.

In his views, the Chairman, President’s Counsel Ronald C. Perera noted the greatest strength behind ending 2017 with high note is the well experienced and knowledgeable staff strength of 7,500 dedicatedly working towards implementing the meticulous and timely strategies executed by the management. He also stressed the importance the bank has placed on enhancing the customer centricity in all avenues of the bank for a better customer experience.

“Although we are moving fast towards digitally enabled banking culture, the weightage we have placed on improving the quality of human touch has never been compromised. We believe the human factor, yet has much more to do with customer care and tangibility,” he further stressed.

Year 2017 has been an another rewarding year for the Bank of Ceylon with excellent financial performance and many initiatives being launched to further enhance the readiness of the bank towards 4th Gen Banking.