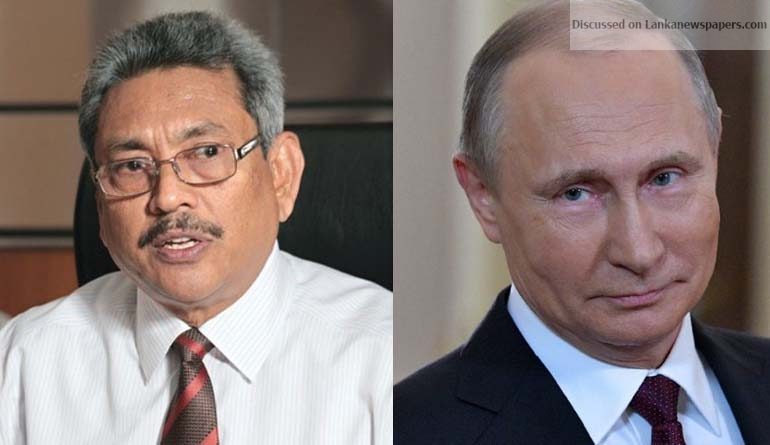 I support Putin, just as I support Mahinda, and with more caution and caveats, am willing to support Gotabaya if the need arises, because I remember what context gave birth to them, what they stand against, and the causes which made/are making/may make the masses turn to them as alternatives. – Dr. Dayan Jayatilleka

Gotabaya is our Putin – Udaya Gammanpila

‘Don’t forget that we are living in Russia, the land of the tsars … the Russian people like it when one person stands at the head of the state’, and ‘The people need a tsar, i.e. someone to revere and in whose name to live and labour.’ – Joseph Stalin

This fundamental fact implies that in time of revolution it is not enough to ascertain “the will of the majority” —  you must prove to be the stronger at the decisive moment and in the decisive place; you must win’ (V.I. Lenin, ‘Constitutional illusions’)

Ironies abound. Three years in to his presidency on 15th July 1979, Jimmy Carter made his famous speech about a crisis of confidence that his nation faced. He spoke of how the isolated world of Washington politicians set a nation adrift. When a nation hopes, dreams and vision of its future are muddled, it becomes a crisis of confidence. It was a decade later that that indomitable soldier and patriot Lieutenant Colonel Gotabaya Rajapaksa permanently migrated to that country of Thomas Pain who wrote the treatise – The Rights of Man.

Such a Crisis of Confidence engulfs us in Sri Lanka today. Governance is in a near state of paralysis. The Economy has registered a dismal growth rate of 3.4 percent. Policy planners are adrift, and the people are treated to a deluge of empty rhetoric from both sides of the power barricade.

This missive is penned on Thursday 29th March. Within the week, we will surely learn the details of the denouement of the no confidence motion against the Prime minister. He is wounded. We will discover soon enough how deep and dangerous his wounds  have been.

Other momentous happenings have been overshadowed by the predicament of the prime minister. The Indian Express – the prestigious print broadsheet has published one on one interviews with the Former President Mahinda, his heir apparent Namal and most importantly the pretender to the throne – former secretary to the ministry of defense Gotabaya who plans to be a deep statesman of a deep state.

This writer owes an unconditional apology to the author of Gota’s War the humorously Homeric account of the end of the civil war that is brazenly adulatory of the then Defense Secretary.  On several occasions I have described him as a sycophantic profiler of the former Defense Secretary. What can the poor man do, if that was what was told him by the self-proclaimed war hero- the subject of his tome?

Gotabaya Rajapaksa is a self-possessed man who loves to possess his self. The man is sincerely convinced that he and he alone ended the war. He tells Arun Janaradanan of the Indian Express “In Sri Lanka, I didn’t create the war, I ended the war.”  The word ‘we’ is not in the vocabulary of our hero, patriot and nation builder.

He is a man with opinions and a committed sense of purpose. With the Indian Express’s Arun Janardanan he unfolds his road map.

“You have to understand that peace doesn’t come overnight after three decades’ long war. There are people who were brainwashed ideologically. I won’t say wounds are healing now, as I don’t know what has happened in the last three years. But I strongly believe that what is important is economic freedom for people, before talking about political freedom. Political freedom is necessary, but what they are talking about is devolution and all that. That is secondary. What people needed was food, employment and basic necessities to rebuild their lives… But Tamil politicians put their political interests above these essential needs of people.”

I do not know how many readers will agree with me. The man is not a villain. He is a moron. He simply does not understand that the Tamil people do not demand food. They demand dignity. The Tamils demand self-respect.

The guy asked Stephan Sakur of BBC ‘Who is Lasantha” That probably explains why Arun Janaradana did not broach the subject of dignity and self-respect. What is dignity? Why do the Tamils want self-respect? Aren’t roads and electricity good enough?

That Sri Lanka needs a strong leader with a clear vision is the tantalizing, seductive myth of our times. The imperative of strong decisive leader is intrinsically twined to a virulent nationalism and a reading of a faith that is lightyears removed from the universal values of the flawless dharma that made emperor Ashoka to embrace it and spread it around the then known world.

Nationalism per se is not a harmful or adverse sentiment. But when it is deployed as an instrument of partisan power play in an already fragile democracy, it assumes the ugly character of group incest, idolatry and tribal insanity.  When it is adopted as dogma by a deranged control freak it erodes the principles of truth and justice. It becomes a love affair with an imagined nationhood above humanity. Nationalism of this kind is the inevitable precursor to the ‘national security state’.

This sickening humbug is threatening to overpower our pursuit of self-realization, our search for fairness, our thirst for freedom and our desperate attempts to appease our collective hunger for equity in social relations.

The exuberance of democracy experienced in the last three years is quietly receding. A forbidding sense of an impending apocalypse is noiselessly nudging in.

Gotabaya Rajapaksa is, today a man ready for his tryst with destiny.   He is inflamed with that peculiar kind of passion that drives narcistic people who enjoy the means irrespective of the urgency or the necessity of the ends. After several successes in gerrymandering the legal process to delay proceedings against him, he is confident that he can amputate the long arm of the law by the time we face the next presidential and parliamentary polls.

He has mastered the art of capturing headlines in electronic media with biting, bitter voice cuts . He gives them to waiting media teams outside cort rooms where he regularly appears to mark his attendance or to seek remedies in the form of writs and restraining orders to prevent or delay proceedings against him. They are all politically motivated witch hunts.

Emerging after a Court hearing, two days ago, he gave an ominous warning. We will do it the way Ranil was made Prime Minster and Shirani Banadaranayake was made the Chief Justice he promised.

Clearly buoyed by the LG polls results he is convinced that victory is round the corner. ‘Look how they voted for the Bicycle and the Naya. We will even use a Mapila and reach our goal’ he chuckles. His choice of the reptile Mapila has a Freudian connotation.  There is a local folk belief that this snake is highly poisonous, which it is not.  It is also falsely believed that the snake sucks out the blood while inducing the victim in to deep sleep.

Indeed, there is a Freudian snippet that explains neurosis as the inability to deal with ambiguity.

Radiating a haughty confidence, Gotabaya promised to put matters right when he is back in the saddle. He accused the government of failing to maintain law and order as was done under his watch.  The man is convinced that the ultimate prize is within his grasp.

The message is unequivocal. When in power, he will start from where he stopped last time. The reference to the apex court of the land is no empty threat. As all dictators are, he is a man with strong opinions. Their beastly and warped opinions earn them ardent followers who misread arrogance for competence and character.