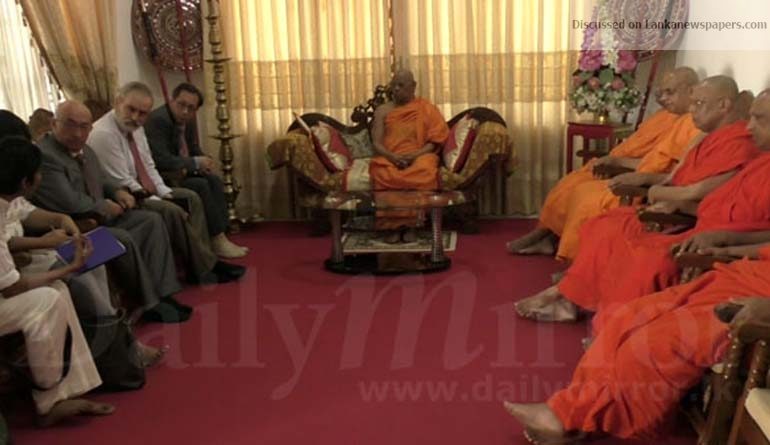 Maha Nayaka Thera of the Malwatta Chapter Most Ven. Thibbatuwawe Sri Sumangala Thera today told a group of European Union Ambassadors that it was not justifiable to label the violent incidents occurred in Theldeniya as communal violence.

The group of EU Ambassadors including Switzerland Ambassador Heinz Walter Nederkoorn, Romanian Ambassador Victor Chiudea and headed by EU Ambassador Tung-Lai Margue called on the Mahanayake Theras of the Malwatta and Asgiriya Chapters today in the aftermath of the Kandy violence.

Most Ven. Thibbatuwawe Sri Sumangala Thera went on to say that Buddhists follow the concept of non-violence and that they are not barbarians to oppress Muslims.

“These incidents are no way a result of communal violence. Racism is not only in Sri Lanka but everywhere in the world including the US, Europe and even in India,” the prelate said.

Meanwhile, the Registrar of the Asgiriya Chapter Ven. Medagama Dhammananda Thera said Muslims religious centres had been established even within the lands owned by Buddhist Temples.

“There is no communal violence between these two groups but some are attempting to create issues,” he said