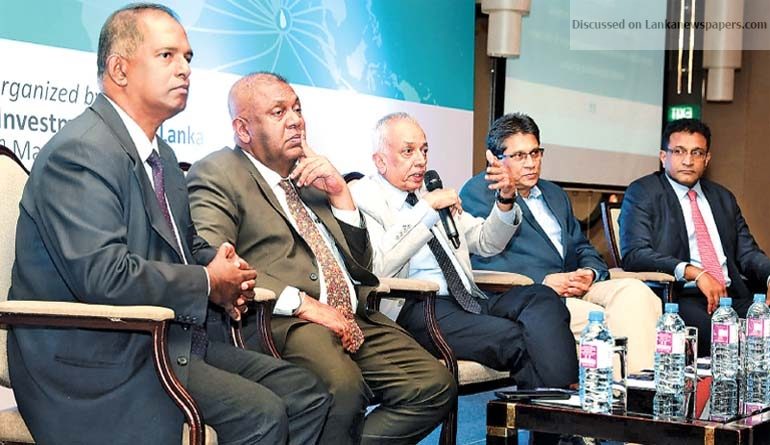 The government will speed up creating three new Board of Investment (BOI) zones at Bingiriya, Mawathagama, Milleniya and Charlimount (Matara).

A budgetary allocation of Rs. 2.5 billion has beeng approved to develop these new zones.

This was disclosed at a BOI held investor facilitation and networking event at the Cinnamon Lakeside Hotel to engage in a dialogue with investors in Sri Lanka who have re-invested in Sri Lanka. By confirming their trust in Sri Lanka and in the Board, these investors had sent a very positive message to potential investors both in Sri Lanka and overseas.

At the function the audience which consisted of nearly 200 existing investors who had opted to reinvest in the country were addressed by Chief Guest Mangala Samaraweera, Minister of Finance and Mass Media, Malik Samarawickrama, Minister of Development Strategies and other BOI members. In recent times the BOI has identified existing investors as a major potential source for future investments in the country.

Hence more investor friendly mechanisms are being set up to fast track the approval and implementation of projects are additional reasons and the fact that there are currently more opportunities to invest in new areas.

Also new liberalized laws covering the foreign exchange regime, simplified taxation laws that reduce upfront costs and efforts to improve facilitation are also important considerations. The BOI strategy in that respect is to identify specific targeted sectors for reinvestment and then actively promote it with the investor to expand his/her investment.

In addition the BOI has been engaged in facilitation which includes identifying new lands for new zones to channel the investor to that location. The reinvestment strategy of the BOI focuses mainly on developing the manufacturing sector which is the main target with a strong emphasis on attracting electronics, industrial machinery, automotive, electrical equipment, food products and pharmaceutical to name just a few.

Furthermore, reinvestment is also sought in services which are also promoted including IT and software development, BPOs, tourism and education.

BOI has also set up a new reinvestment team which has identified several activities that will encourage reinvestment. Firstly this would include communicating with companies which are known to be pleased with investing in Sri Lanka as well as some of the largest investors in term of the value of investments, exports or employment generated. Another consideration of the reinvestment team of the BOI is to encourage new investors like their suppliers or partners in the supply chain to invest by using the good offices of existing investors.