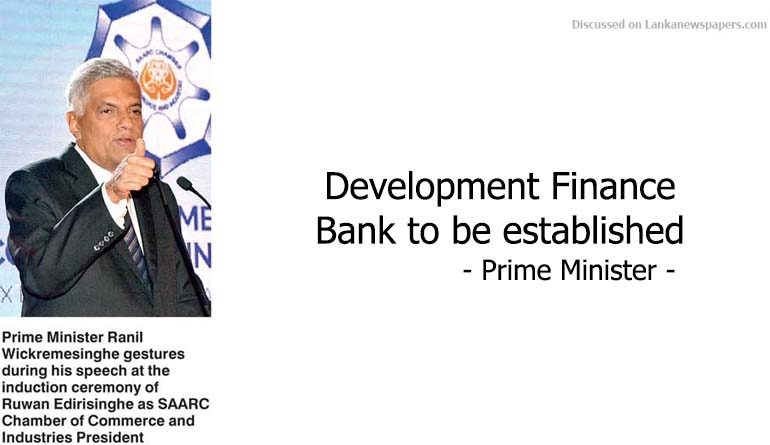 Prime Minister Ranil Wickremesinghe said that a list of changes would be brought to the private sector with the establishment of the Development Finance Bank, as well as to amend the Inland Revenue Act, which is to come into effect on 1 April.

Addressing yesterday’s induction ceremony to appoint the new president for the SAARC Chamber of Commerce and Industries, the Prime Minister said that a separate Bank to assist development and emerging business ventures would be set up with the assistance of four leading Banks in the country. “We will be establishing a Development Finance Bank to provide financial assistance for emerging businesses and entrepreneurs. We will be doing so with the assistance of DFCC Bank, NDB, Bank of Ceylon and Peoples’ Bank. Since the 1960s, the funding given by the development financing system enabled a large number of manufacturing industries and tourist services. The rise of our apparel industry is thanks to the funding given by our financing system. We got off that some time ago as globalisation crept in, but we find this is essential if the Sri Lankan businesses are to develop and compete.” In addition, the Prime Minister noted that amendments to the Inland Revenue should be expected.

“The private sector has pointed out several shortcomings in the recently enacted Inland Revenue Act. We are currently in discussion with the private sector and hope to bring in amendments to the Act in the near future.”

Premier Wickremesinghe then highlighted the importance of Sri Lanka and the SAARC nations joining in the emerging trade systems of East and South-East Asia. “I believe that in the next decade Asia will develop its own trade system, much like that of European Union; and we in the SAARC must integrate. Regional Comprehensive Economic Partnership (RCEP) is one such free trade agreement. India has joined this partnership and Sri Lanka too should be applying.”

Ruwan Edirisinghe, founder and head of the RN Construction Group was appointed as the President of the SAARC Chamber of Commerce and Industries.