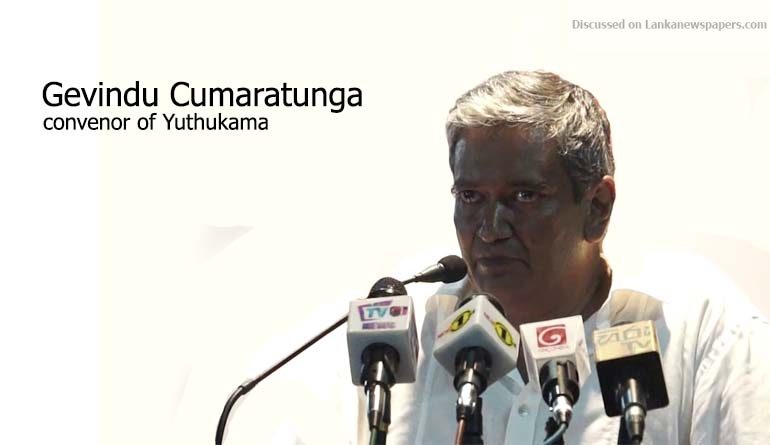 A consensus between those who had challenged the Judicature Amendment Bill in the Supreme Court and the government could have been easily reached if the latter abandoned the move to further weaken the judiciary through constitutional means, Gevindu Cumaratunga, convenor of Yuthukama said yesterday.

Enactment of the Judicature Bill would strengthen the minister in charge of the justice portfolio at the expense of existing legal provisions for the protection of suspects and also give undue powers to the Attorney General and Director General of the Commission to Investigate Allegations of Bribery or Corruption (CIABOC), Cumaratunga alleged.

Cumaratunga said so at a media briefing at the Sri Sambuddhathwa jayanthi Mandiraya, Thunmulla yesterday. He said those who had moved the Supreme Court did so as they felt direct ministerial intervention in setting up of an Anti-Corruption High Court and the AG and DG, CIABOC given the power to choose cases to be heard at the new court would cause turmoil.

Cumaratunga flayed the civil society grouping supportive of the Sirisena-Wickremesinghe administration for promoting a law even contrary to the much touted 19th Amendment to the Constitution portrayed as the panacea for Sri Lanka’s ills. Yuthukama convenor explained that Joint Opposition Parliamentary Group Leader Dinesh Gunawardena, MP, Chairman of Sri Lanka Podujana Peramuna Prof. G.L. Peiris and the Bar Association of Sri Lanka (BASL) had made submissions to SC in this regard. In addition to them, Prof. Channa Jayasumana, too, had moved court. Jayasumana moved court on behalf of University academics and was represented by Sanjeewa Jayawardena, PC.

While welcoming the government efforts to expedite hearing of high profile cases by way of setting up of an anti-Corruption High Court, Cumaratunga asserted that the government caused an unnecessary issue by transferring CJ’s power to decide on cases to be heard to the AG and DG, CIABOC.

Parties to the Supreme Court petitions late last week made written submissions and the SC ruling is expected to be given to the Speaker soon.

Asked whether he was aware that Joint Opposition representatives as well as the BASL had endorsed recommendation for anti-Corruption High Court according to a report released by the Sectoral Oversight Committee on legal Affairs (anti-corruption) and Media, Cumaratunga said that he wasn’t aware of that. However, the bone of contention is the move to place vital powers in the hands of the minister in charge of the justice portfolio, the AG and DG, CIABOC.

Romesh de Silva, PC, who had represented Mahendran appeared for the BASL while Gamini Marapana, PC and Navin Marapana appeared for Prof. Peiris. They represented PTL at the Presidential Commission of Inquiry headed by Justice Chitrasiri.

Cumaratunga emphasized that the right of litigants to secure the services of best possible legal counsel should be respected.

Cumaratunga alleged that the influential civil society grouping that played a significant role in the change of government was at the forefront of the operation to secure approval for the Judicature Amendment Bill in its present form. Cumaratunga said that J.C. Weliamuna, PC, Prof. Sarath Wijesuriya, Gamini Viyangoda and former Ravaya editor K.W. Janaranjana had been working overtime to promote the proposed law. Cumaratunga also attacked Saliya Pieris, PC, member of Human Rights Commission of Sri Lanka (HRCSL) and Chairman of Office of Missing Persons (OMP) for backing the controversial law. The public activist also frowned on the role played by Dr. Jayampathy Wickremaratne, MP. The media was told how the UNP had brought in the LSSPer to parliament through its own National List to engage in ‘special operation’ in aid of UNP led political project now underway.

Alleging that an attempt was being made to depict twice president Mahinda Rajapaksa as a corrupt executive, Cumaratunga challenged those good governance exponents to peruse former Ravaya editor Victor Ivan’s revealing books, Chaura Rajina and Chaura Rajjaya that dealt with former President Chandrika Bandaranaike Kumaratunga and the UNP administration.

Cumaratunga alleged that none of those who had been pushing for anti-Corruption High Court uttered a word when the AG intervened to question Prime Minister Ranil Wickremesinghe called by the presidential commission inquiry into treasury bond scams, without allowing the senior counsels who had been diligently grilling witnesses throughout the proceedings of the Commission.