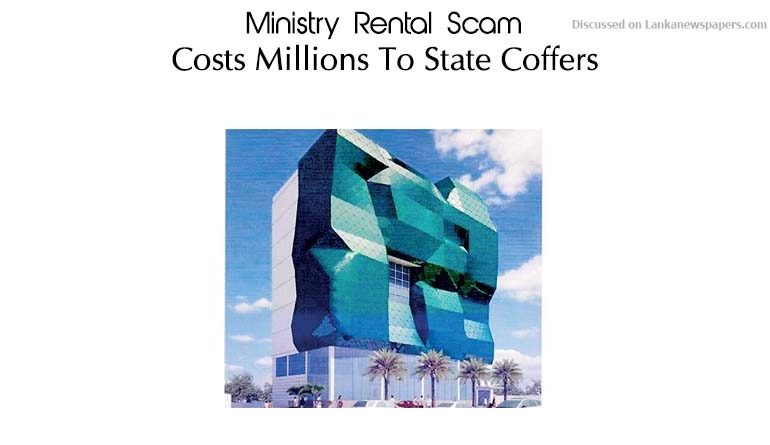 Politics Business Headlines
March 23, 2018 Lankanewspapers 0 Comments
Startling revelations have now emerged of how the Chief Accounting Officer of the Ministry of Agriculture deliberately disregarded the directives of the Committee on Public Accounts (COPA) and proceeded with an allegedly scandalous deal resulting in a colossal loss to the country.

COPA, at its session on April 7 this year, informed Chief Accounting Officer (Ministry Secretary), Ministry of Agriculture B. Wijayaratne that approval would not be given to the then proposed plan to lease a building to house the ministry from an individual for the price that was quoted without following government procurement guidelines. Despite this warning, Secretary Wijayaratne had entered into an agreement with D.P. Jayasinghe Tours and Transport Co. (Pvt) Ltd the following day (April 8) which has now raised many eyebrows.

Wijayaratne was appointed Agriculture Ministry Secretary by letter dated February 15, 2015 in which he was specifically asked to comply with the directives of the Auditor General, the COPA and the Committee on Public Enterprises (COPE). However Wijayaratne has now allegedly violated his appointment conditions stipulated by the Ministry of Finance.

Paragraph 12 of Wijayaratne’s letter of appointment states, ‘Special attention should be paid to the observations of the Auditor General, COPA and COPE. While the minutes of the meetings of the COPA and COPE contain observation/directives to be complied with, the reports submitted by such committees to the Parliament contain recommendations to be implemented by the Ministry, or the relevant institution pertaining to accounting and other deficiencies, reporting delays, system weakness and inadequacies etc. Please ensure that appropriate action as well as remedial measures are taken without delay.’

“Despite these instructions given in his letter of appointment, what made Wijayaratne sign this agreement the very next day of COPA’s endorsement?  Wijayaratne being the Chief Accounting Officer, is responsible for the overall supervision of the financial administration of departments, corporations, government-owned companies and their subsidiaries gazetted under the Ministry of Irrigation and Agriculture. He has to adhere with Financial Regulations (FR) 127– general responsibilities of Chief accounting Officers, FR 128– general responsibilities of Accounting Officers, FR 150 –appropriation accounts, FR 151– revenue accounts, FR 152– Committee on Public Accounts (COPA) and FR 625– recording of foreign aid expenditure in the treasury books. Although Wijayaratne has to abide by all these financial regulations, by leasing a building which is more than what the government valuer’s valuation report states, shows how he has disregarded government FR regulations,” reliable sources from COPA said on condition of anonymity.

The Sunday Leader recently exposed how politicians and chief accounting officers are not in support of bringing in the National Audit Act to give powers to the Auditor General to impose surcharges on errant government officers and politicians guilty of financial misconduct.

“The country wants the implementation of the National Audit Act to recover looted money. This surcharge procedure involves the recovery of amounts deemed to have been lost to the state through negligence, delay, fault or fraud from officers responsible and every case of loss would be promptly dealt with by following appropriate procedures as laid down in the Act,” sources claimed.

According to the sources, Wijayaratne signed the agreement with D.P. Jayasinghe Tours and Transport Co. (Pvt) Ltd on April 8, 2016 to lease D.P. J. Towers at No. 288, Sri Jayawardanapura Road, Kotte, Rajagiriya for a monthly rental of Rs.21million.

“The COPA was concerned as to why government procurement guidelines were not followed to lease a building for the Agriculture Ministry and why the Ministry Secretary agreed to pay the monthly lease rental the owner requested which was Rs.21 million although the government valuer’s valuation for the same building was Rs.13.5 million a month. JVP MP Bimal Ratnayakeat the COPA said that this is a large-scale fraud and that government financial regulations are more powerful than cabinet decisions. Although COPA did not direct the Agriculture Ministry Secretary not to sign the lease agreement, it specifically said that it would not receive COPA approval at any time,” sources added.

Meanwhile, in a reply to an audit query, Wijayaratne on June 6, 2016 had written to the Auditor General stating that the lease agreement was signed based on a cabinet decision (cabinet paper no: 16/ 0309/ 702/ 010) and that he as a ministry secretary has to comply withcabinet decisions.

It is understood that it was Prime Minister Ranil Wickremesinghe that wanted the Agriculture Ministry shifted to a new location in order for Govijana Mandiraya to be used for parliament.

“There was no plan to shift the Irrigation and Agriculture Ministry to new premises until Prime Minister Ranil Wickremesinghe wanted Govijana Mandiraya for some parliamentary work. It was the Prime Minister that submitted a cabinet paper to get its approval to lease the building in question since the earlier decision to shift the ministry to the Sethsiripayabuilding in Battaramulla was not sufficient,” reliable Agriculture Ministry sources said.

Be that as it may, questions have now been raised as to why the Prime Minister submitted a cabinet paper to get cabinet approval to lease D.P.J Towers at Rajagiriya without calling quotations.

The Sunday Leader is in possession of the Prime Minister’s cabinet memorandum on the lease of a new building for the Ministry of Agriculture. It further states, ‘The cabinet of ministers at its meeting held on September 22, 2015 having considered the cabinet memorandum dated September 21, 2015 submitted by the Hon. Prime Minister titled Reform of the Parliamentary Committee System and Additional Office Space Requirements’ no: CP15/ 1301/ 702/ 007 has granted approval to acquire Govijana Mandiraya building presently occupied by the Ministry of Agriculture for Parliament and shift it to the adjoining Sethsiripaya new building, Battaramulla. However due to non-availability of sufficient office space in it for the Ministry of Agriculture, alternative building has to be found.

‘The building D.P.J. Tower, No: 288, Sri Jayawardanapura Road, Kotte, Rajagiriya, owned by D.P. Jayasinghe Tours and Transport Co. (Pvt.) Ltd which is in close proximity to the parliament and having the required space for the Ministry of Agriculture has been identified for the purpose.’ According to this cabinet memorandum, the entire building could be leased out for Rs.21 million + taxes, 24 months’ rent in advance and three months’ security advance to be paid, should have an at least five year lease agreement and the rent should be increased by 15% after three years, the 24 months’ rent in advance could be deducted monthly by the Ministry in the last two years.

In that backdrop it is surprising as to why the President and other cabinet of ministers gave their approval to pay Rs.21 million for the same building disregarding the government chief valuer’s valuation. Although these same peoples’ representatives accused the former Rajapaksa regime of not complying with government procurement guidelines and offering certain contracts to parties known to the Rajapaksas, the present good governance administration too is now following the same Rajapaksa path openly and blatantly,” sources alleged.

The sources further queried as to how the Agriculture Ministry has paid Rs.63 million from April to June as the monthly rent for the building, although the Ministry and its other departments are yet to move to it.

“The government was in a hurry to lease the building claiming that parliament was urgently in need of the Govijana Mandiraya but it is three months since the agreement was signed and there are no signs of moving to the new location; public money is just being spent to make the building owner rich.

This is only one instance we have come across of how the good governance administrators are spending public funds to please their friends but how many more such deals must be being carried out with the knowledge of the present leaders? Until such shady deals are stopped completely as promised on election platforms prior to the 2015 presidential elections, the good governance administrators cannot give relief to the people and bring down the ever escalating cost of living,” sources alleged.

When contacted Agriculture Ministry Secretary B. Wijayaratne to find as to why as the Chief Accounting Officer he failed to call for quotations instead of accepting the cabinet approval which is detrimental, Wijayaratne said that this is a  question  we should ask from the Prime Minister not from him.

“When the parliament wanted our ministry to vacate the Govijana Mandiraya building all discussions into leasing a new building took place at the Prime Minister’s office. I was never asked to attend to any of these meetings. It was the Prime Minister that submitted the cabinet memorandum. I am not involved in any of these dealings,” Wijayaratne said.

When told that he as a permanent public servant has to take the responsibility for such dealings but not the Prime Minister nor any MP as politicians, Wijayaratne said how the cabinet decided to go ahead of the lease although he submitted two cabinet memorandums following the COPA meeting.

“When the COPA said that they do not give any approval to this, I wanted them to give me an order to stop signing this agreement. They said that they cannot give such an order. So I had to go ahead with the signing of the agreement the following day but later I submitted two cabinet memorandums but the cabinet refused to accept it and wanted me to go ahead with the initial plan,” Wijayaratne added.

Although this newspaper asked Wijayaratne to let us know the dates he submitted the said cabinet memorandums, he said that he is in Nuwara Eliya and is unable to furnish the details. “Sorry I am not in office now and do not have those details with me to give you,” he said.