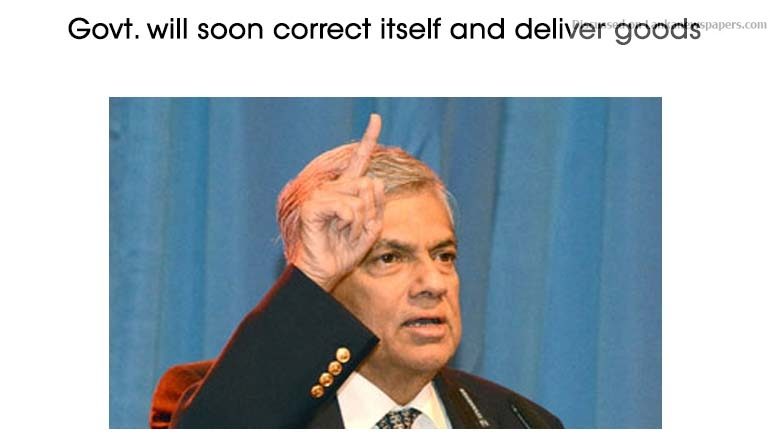 The government will soon correct itself speedily and deliver what the people need just after the Sinhala and Hindu New Year, Prime Minister Ranil Wickremesinghe said today

The Prime Minister expressed these sentiments at the opening of the new belfry and the golden fence around the sacred Bodhiya at Sri Anandaramaya in Kegalle.

“We said we would do many things. We were not able to implement some of the things as promised and could not complete other programmes we started. However people wanted things done fast. This is why they rejected us at the last local government election. People actually gave us a signal. Therefore we have to correct ourselves without delay,” the Prime Minister said.

He said the government had already fixed a plan of action to deliver what the people want. The first one he said is to make essential goods and services available at affordable prices. Also he said employment opportunities had to be created as soon as possible while more investments should be brought in. He added that it was essential to expedite the development of infrastructure facilities. ” We will implement all these plans rigorously after the Sinhala and Hindu New Year,” he added.

Referring to the recent clashes in Kandy, Mr. Wickremesinghe said the riots had resulted in people of other religions losing their trust on the majority Buddhists. “It is not possible to safeguard Buddhism if others lose their faith on Buddhists, ” he also said.

State Minister of Defense Ruwan Wijewardene said it is essential to develop temples in villages. “Buddhism could be safeguarded only if temples in the villages are developed,” he said.

President of Amarapura Maha Sanga Sabha Venerable Gamthune Assaji Thera said some VIPs does not know how to engage in religious observances in the proper manner. ” Some VIPs does not know how to resite gathas. I have to say these things today as these VIPs who run the country does not seek the advise of maha sanga though they are bound by the tradition to do it” the Thera said.