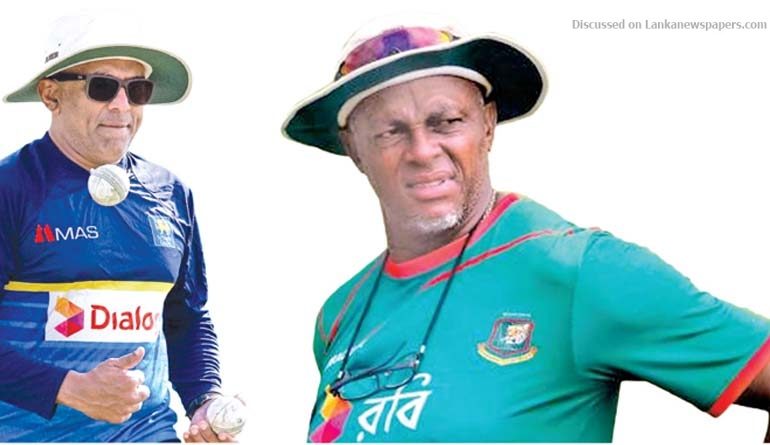 Sri Lanka head coach Chandika Hathurusingha said that his bowlers will have to step up because the pitches prepared for the Hero Nidahas T20 tri-series matches have been very good.

Hathurusingha was reflecting on the shocking defeat Sri Lanka suffered at the hands of Bangladesh even after posting a total of 214 which is normally considered a winning score. But in this instance Bangladesh stunned Sri Lanka by chasing down that target to post a record win.

The two teams are now clashing in their final league match where the winner of today’s game at the R Premadasa Stadium will meet India in the final on Sunday.

“It’s a very crucial game, but we’re preparing as normal. The advantage we had is that we played them recently. We know a lot about them and they know a lot about us as well. There’s nothing that both teams can do as far as surprises go,” said Hathurusingha at the pre-match press conference yesterday.

“The second game put us under pressure a little bit. You don’t lose many games after scoring 214 runs. They put our bowlers under pressure. I don’t think we bowled well, we need to accept that. Then again saying that, all six bowlers or five bowlers don’t go for 10 runs an over many times in your career. At the same time we have to give credit to Bangladesh for the way they batted,” he said.

On the preparation of pitches Hathurusingha said, “In this tournament the bowlers have to step up because the pitches are very good. You can’t blame them either. If you know our bowlers, I think in T20I, we have a very young attack. Some of them have played less than 10 matches, but that’s not an excuse. That’s why we are here we want to give them experience.

“The challenge for them is the conditions. Our batting is very good, it’s been easy to score runs off the new ball and the field restrictions, so we’re maximising that. If you look at our last five T20s our record is better than during our previous ten matches overall. We have to improve, we’re not number one or the number two team in T20I. There’s a lot to improve and that’s what we’re working on,” he said.

Although Sri Lanka lost back to back matches after beating India in the lung-opener of the series, Hathurusingha said the defeats didn’t change their style of preparations.

“Our preparations as far as bowling, we have given it some thought. At the start of the tournament we felt that these were our best bowling options and my opinion on that hasn’t changed. We have prepared well. Just like we prepared for the first game, we have prepared for every game therein. Our preparations are consistent. We are always of the mindset that if we continue along those lines then the outcome will more often than not be in our favour.”

Bangladesh have included their star all-rounder Shakib Al Hasan in the squad after a finger injury but whether he is fit enough to play is a matter of conjecture.

“The only thing I can think of is that if Shakib is half fit, I think it’s a desperate measure (to include him in the squad). If he’s fit Bangladesh really have an advantage, because he is the world’s number one all-rounder and we all know that he is a quality player,” said Hathurusingha.

Bangladesh coach Courtney Walsh who has worked alongside Hathurusingha when the Sri Lankan was head coach of Bangladesh said that Shakib was on his way to Sri Lanka and like any other player he will be assessed before being included in the playing eleven.

“If he is fit, he will be considered to play. We are hoping he will be fit enough to play. He had a net session in Dhaka. We were hoping to have him from the beginning of the tournament. He was always part of the setup. We knew he was going to make a comeback if there was any chance for him. It is nothing to worry about. Once Shakib is fit, we are going to welcome him to the team,” said Walsh.

The former West Indian fast bowling great said that the conditions have been reasonably good so far and that most of the matches have been won chasing except yesterday (Wednesday). “We are happy to bat or bowl first. We just need to play a lot better and with more consistency.”

Walsh said that it was crucial to have variations in the bowling in this tournament. You have to have the change of pace and yorkers. It is what completes a good skills set. Execution in the middle hasn’t been as consistent as it can be,” Walsh said.