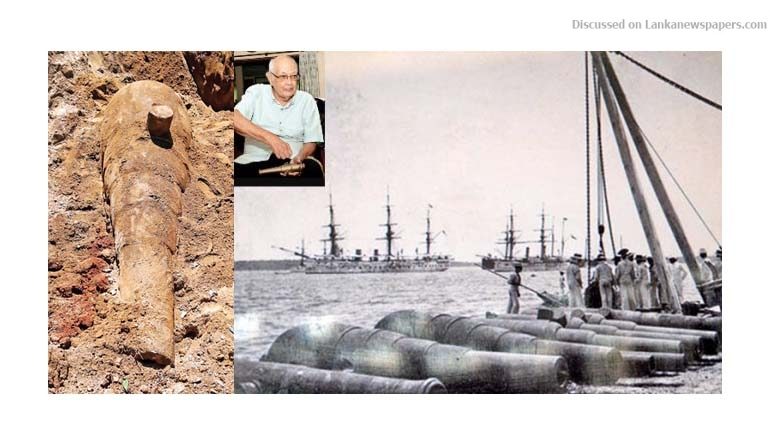 only Fort Ostenberg in Trincomalee could talk, it would brag of its lost glory: the wars waged to claim the prized naval base it watched over and the cannon which were fired over it. The Portuguese, the Dutch and the British, suspicious of the entire world, would not compromise the coastal defence of their tiny colony which was too good to lose.  Forts were erected, men were stationed and cannon installed…

Two cannon believed to be of British origin, were unearthed recently at the construction site for an accident ward of the Trincomalee Hospital. The Assistant Director Archaeology (Trincomalee), W. H.A. Sumanadasa told the Sunday Times that the recent finding of a second cannon was made a few days after the first cannon was unearthed, a few weeks before. “The most recent cannon, unearthed which is about eight tons in weight and about 11 feet in length, was deposited at the Maritime and Naval History Museum in Trincomalee with the assistance of the Sri Lanka Navy. We are now awaiting a team of experts from the Archaeology Department’s Chemical Conservation Division to do the necessary cleaning and conservation.”

The word ‘cannon’ derives its name from a mix of Latin and Italian, for ‘tube’, ‘cane’ or ‘reed’. The word, according to historical sources, was used in Latin for a gun in 1326 in Italy and in 1418 in England. First appearing in Europe in the 14th century, the cannon had assumed its classic form at the beginning of the 17th century, which had persisted upto the mid-19th century. What followed towards the end of the 19th century, as Lieutenant Commander (Retd.) Somasiri Devendra, tells the Sunday Times, is the rifled muzzle-loading cannon (RMLs). The recently unearthed cannon from the Trincomalee Hospital site is of this type, he says.

RML cannon, as the senior naval officer, points out, have been found in many places in Trincomalee, including at the Kachcheri in Fort Frederick. An authority on maritime archaeology, Mr. Devendra made his own finding of a RML in the late 80s on Ostenberg Ridge in Trincomalee. RMLs, he further explains, are also classed as ‘Armstrong Guns’, after Sir William Armstrong, the man who  invented the process.

Although the year of manufacturing of the recently unearthed cannon is yet to be confirmed after chemical conservation, they are of British origin, believes Mr. Devendra. “RMLs were manufactured in Britain after 1860 and they were replaced after 1900. As Trincomalee was in British hands only British guns were installed,” he says. Throwing light upon the ammunition used on RMLs, he adds that ‘studded shells’ were fired. Unlike older, smooth-bored cannon, RML had muzzles that had spiralling grooves cut in them. The elongated and pointed projectiles of the barrel, usually made out of cast iron, had copper studs. These studs, as Mr. Devendra explains, enabled the shells to spin as they left the barrel. The muzzle of the gun and the ends of the rifling grooves, were flared to make it easier to engage the studs in the rifling when loading. “The mechanism of rifling made the shells spin as they travelled  through the barrel and enabled the shell to travel further with greater accuracy.” Somasiri Devendra with a replica of a cannon

A cannon broadly consists of a barrel, which is the ‘tube’ within the muzzle that ends in a chamber. The cannon ball is inserted into the barrel and it goes through to the chamber at the end. Inside the chamber is a packing of ‘gun cotton’ and gun powder. When the ‘packing’ is ignited, the explosion propels the ball through barrel and out. The oldest cannon found here at home dates back to the Portuguese era. The Colombo National Museum is home to one of them. Interestingly, Sinhalese cannon too had been cast. There is one, made in Jaffna by the Dutch, in a British museum.It is ornamented with stylized foliage, speaking for the dexterity of the ancient Lankan craftsman. Most of the locally cast cannon are believed to have been commissioned by the Dutch East India Company.

All cannon dating back to the colonial times, are engraved with the royal cypher of the respective era. The RMLs as Mr. Devendra points out, carry the Victorian royal cypher. “All these cannon manufactured in Great Britain were brought here on ships. They were made of iron and steel unlike the bronze and iron fusion apparent in the pre-British cannon,” adds the scholar sharing a photograph of a British ship unloading its cannon in the Trincomalee harbour. Besides cannon installed on forts and for coastal defence, there had also been those installed in ships, says Mr. Devendra. Picture from the past: Cannon being unloaded at the Trincomalee harbour

With the advent of breech loading in the early 1900s, the RMLs became obsolete and were discarded. “Very often they were used for mooring vessels near the shoreline. Others were  discarded and, with the passage of time, they were buried under soil,” he explains. The long-gone British RMLs rekindled the interest of the Royal Armouries who maintain a record of the barrels surviving worldwide. As communicated by the then Keeper of Firearms of the Royal Armouries in July, 1988 on the discovery of a RML in Trincomalee by Mr. Devendra, his finding is one of a very small number of  10 inch 18 ton guns known today. According to the communication, most of these are found in Gibraltar and only two are believed to be within the British Isles. The original carriage which survived in the cannon found by Mr. Devendra is another feat, as the Royal Armouries note, given their tendency to be destroyed easily during the ‘scrapping programme’ of the RMLs in the early 1900s. The carriages, are even more uncommon than the barrels notes the Royal Armouries.

Cannon are largely used for ceremonial purposes today. Those installed at the Colombo Lighthouse are often associated with the Independence Day celebrations when salutations permeate the air. These, as Mr. Devendra notes, date back to the late 19th century (British era). When conserving for exhibiting purposes, care should be taken at all times to retain their originality as much as possible, he adds. “Painting over them can do more harm to them as the engraved crest which speaks volumes of its history can be lost forever.”