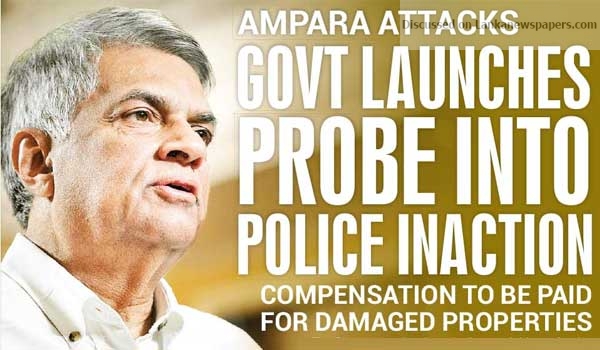 The Government has launched a special investigation into complaints of Police inaction and the submission of an incomplete ‘B’ report on the attack on several buildings in Ampara on 27 February.

The Ministry of Law and Order, in a media communiqué yesterday, said that the Government would provide compensation for the damages caused to private properties, and for the renovation of shops and the mosque damaged during the incident.
The Ministry has also instructed the Deputy Inspector General of Police, for Batticaloa to conduct comprehensive investigations into the incident.

Earlier, Prime Minister Ranil Wickremesinghe had assured Muslim Ministers in the Government, that a special Police team would be deployed to investigate the incident.

The incident was triggered by speculations that sterilization pills were added to food that was served at an eatery in Ampara.
However, medical experts have reportedly said that there was no sterilization pill that could make a person infertile by one intake.