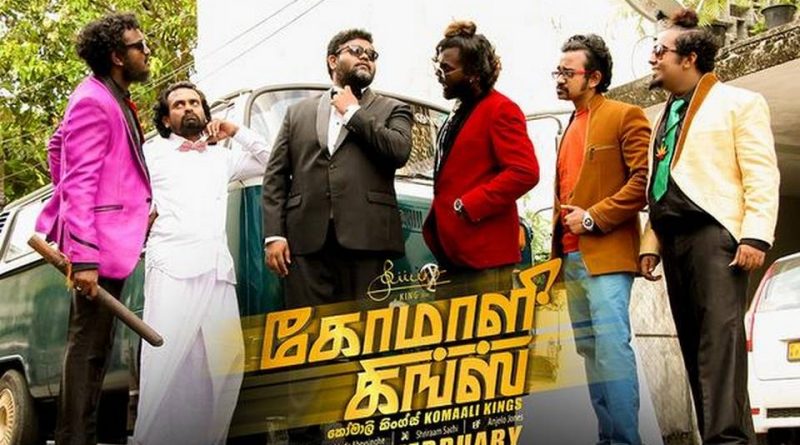 For the first time in 42 years, the island-nation saw the release of a Tamil film made by its own people

Almost every Kollywood production finds an eager audience among Tamil movie buffs in Sri Lanka, but for the first time in 42 years, viewers are flocking to cinemas to catch a film made by one of their own.

Last Friday, Komaali Kings, a full-length commercial feature, premièred in 50 theatres — across the island. “The response has been great so far, and we are hoping to release it in India, and in parts of Europe and Canada,” said its director King Ratnam.

After spending years shooting advertisements and documentaries, Mr. Ratnam, 38, decided to venture into cinema, with a script that he felt was close to the lives of Sri Lankan Tamils. “There is a lot of satire and laughter within Tamil society. Our people faced enormous tragedy and destruction, but if they have braved all that with great resilience, it is because of their inherent matter-of-factness and sense of humour. This film celebrates that,” he told The Hindu. “I draw inspiration from Charlie Chaplin’s famous line: Life is a tragedy when seen in close-up, but a comedy in long shot.”

Mr. Ratnam has a key role in the strikingly irreverent film — of a London-based Sri Lankan visiting the island after many years. The plot — centred at his kidnapping for ransom — is set in Colombo, and later travels to Batticaloa in the east and Jaffna in the north.

During the journeys that ensue, we hear multiple dialects of Tamil spoken in Sri Lanka — from Jaffna Tamil, to the dialect spoken by Tamils in the east, to the Tamil spoken by the Muslims and the variant of the language heard among the hill-country Tamils. “Sri Lankan Tamils are not a homogenous group… There is great diversity within the ethnic community… We have tried to show that diversity. I think Indians must watch the film for that reason alone,” said Mr. Ratnam.

The film also signals the revival of commercial Tamil cinema in Sri Lanka, especially because of its island-wide release. According to the film maker, the last time a Tamil movie was shown in cinemas across Sri Lanka was in 1976, when the film Komaligal’ was released. It was a box office hit and launched the acting careers of many including popular television host Abdul Hameed.

Komaali Kings too is an effort of many debutant technicians. “In fact, 85% of them are Sinhalese. We often hear a lot of big talk on coexistence. We saw that happen on our sets — where none of us dwelt on our own identity or history. I explained the script and the spirit of the story to them, and then it was about channelling our creativity as a team.”

While the entire production took two years, the actual shooting spanned 26 days. The film was made with LKR 3 crore (roughly ₹1.2 crore). “By Sri Lankan standards, that is a big budget,” Mr. Ratnam said.