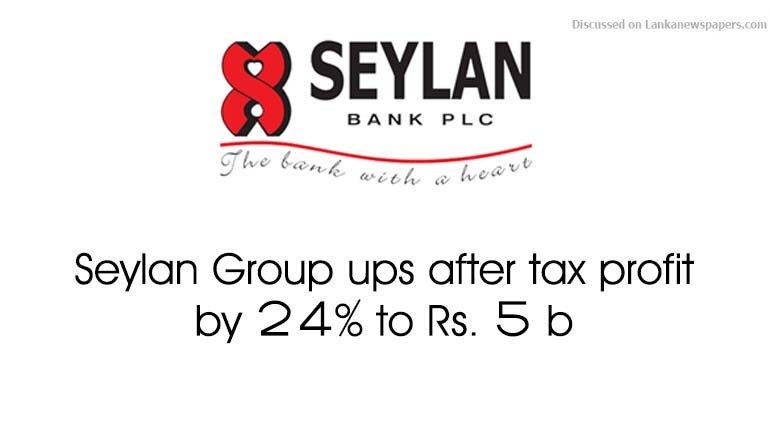 In the backdrop of challenging external environment, Seylan Group has reported a resilient performance by recording a profit after tax of Rs. 5.004 billion for the year ended 31 December 2017, which is the highest profit reported in its history.

Seylan Bank also continued its growth momentum by achieving a profit after tax of Rs. 4.430 billion during the period under review.

Net interest income recorded a moderate growth of 15.03% as a result of the strong balance sheet growth. Net interest margin stood at 4.24%. Net fee and commission income witnessed a 22.07% robust growth from Rs. 3.103 billion to Rs. 3.788 billion during 2017. This was mainly attributed from core banking-related business. Other operating income comprising of net gains from trading, net gains on financial instruments, gains on foreign exchange and other income increased  by 39.18% from Rs. 1.192 billion reported in 2016 to  Rs. 1.660 billion during 2017 mainly due to capital gains on Government Securities.

Total Expenses recorded an increase of 11.90% from Rs. 9.725 billion to Rs. 10.882 billion. Expenses growth was witnessed by a higher proportion of investments being made towards branch upgrading and refurbishments, continuous development in human resources and technology which resulted in the underlying expenses increasing rapidly over the previous period. Nevertheless, the Bank continues to focus on cost management through strategic cost management initiatives.

The Bank also continued focusing on education which has been at the centre of attention of CSR activities. During the year, 33 school libraries were opened, taking the overall number of libraries opened under the project to 153 under “Seylan Pehesara” Project. Further, Seylan Bank initiated Environmental and Social Management System (ESMS) as means of prudently devising the loan book growth, mitigating credit, legal and reputational risks if any that are inherent with environmental and social impact that may arise from advances granted to Corporate and SME clients.

The branch network continued to be the key contributor to the bottom line. In 2017, the Bank network comprised of 166 Banking Centres and 205 ATMs. Bank will continue to grow the Branch network to reach a larger spectrum of customers and widen its geographical presence in order to have a competitive advantage.

The Bank has embarked on an ambitious growth strategy going towards 2020 for which the foundation was laid in year 2017. Seylan 2020 key strategic priorities are to grow its CASA base, SME and Retail lending portfolios by building a dynamic and efficient customer relationship force along with robust support functions by leveraging on information technology.