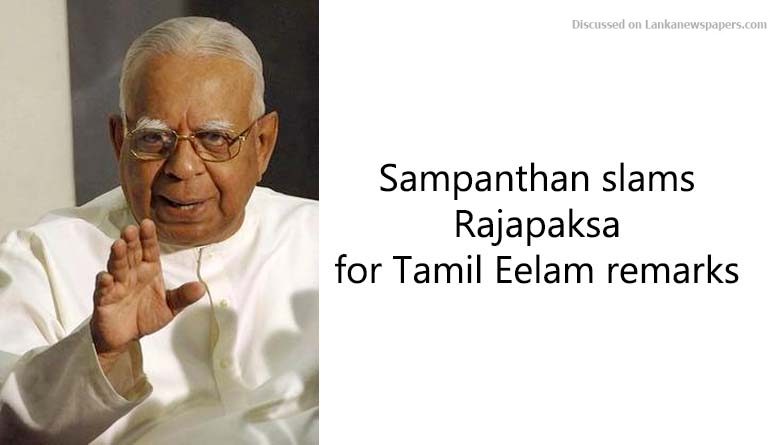 Emphasises that contrary to what the former President claims, his party seeks solution within the framework of ‘a single, undivided country’

Leader of Opposition and senior Tamil politician R. Sampanthan on Monday said he was “alarmed” at former President Mahinda Rajapaksa’s recent pre-poll campaign in which he told the Sinhalese electorate that “a Tamil Eelam would bloom following the local authority elections”.

Emphasising that his party had sought a solution within “an undivided, indivisible, single country”, Mr. Sampanthan asked: “How dare he say [Tami] Eelam could be created?” Observing that Mr. Rajapaksa’s campaign propaganda was “malicious, vicious and fallacious”, the Tamil leader said it was aimed at deceiving “innocent Sinhalese people”.

“If you persist with this agenda, I want to tell you [Tamil] Eelam will bloom not on account of us, but on account of your lotus bud,” he warned, referring to the symbol of the Sri Lanka People’s Front, a new party that Mr. Rajapaksa backed ahead of Sri Lanka’s local authority elections.

Mr. Sampanthan made the intervention during a parliamentary debate on the current political crisis in Sri Lanka, provoked by the outcome of the recent polls. Mr. Rajapaksa’s party won in a majority of councils, while ruling coalition partners — who contested separately — came second and third. The results caused a virtual split in the national unity government, with partners attempting to form government independently.

However, pointing to the vote share of Mr. Rajapaksa, Mr. Sampanthan said he failed to exceed 50% not just in the local elections, but also in the 2015 presidential and parliamentary polls, which the Maithripala Sirisena-Ranil Wickremesinghe combine won.

In the first instance of a national leader responding publicly to Mr. Rajapaksa’s big win, Mr. Sampanthan said there was nothing for the Rajapaksa camp to get excited about.

“Elections are held, parties win, parties lose,” he said, adding that the vote share polled by anti-Rajapaksa forces was greater than what he obtained.

Amid growing uncertainty over the government’s future, Prime Minister Wickremesinghe has said the coalition would stay. President Sirisena is yet to make his position known, but Minister S.B. Dissanayake, a member of his party, on Monday said they would remain in government.