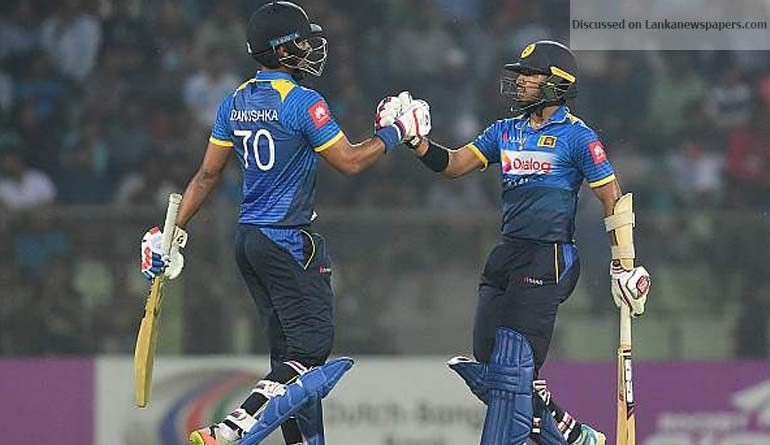 Headlines Sports
February 19, 2018 Lankanewspapers 0 Comments
Dinesh Chandimal, the Sri Lankan skipper, believed that his side had begun to gel as a unit, leaving behind their recent disappointments. He also added that the confidence from the tour will help them in the upcoming days.
Sri Lanka had underperformed to quite an extent last year, but made a superlative turnaround on this tour as they clinched silverware across formats, with the latest being the clean sweep over in the two-match Twenty20 International series.
The win in the Tri-nation series, involving Zimbabwe and the hosts, was the beginning of their turnaround and they continued to do well since then by clinching the two-match Test series and the subsequent T20I one. They had arrived in Dhaka after 23 defeats in 29 ODIs in 2017 and eight successive losses in T20Is. They were even set back by a slew of injuries to their key players, including the ruling out of Angello Mathews midway.
“I think now players are getting some confidence and trust and that is the main thing,” Chandimal said in Sylhet on Sunday (February 18). “We had a really bad couple of years. We didn’t just play as a team, we played as a family,” he said.
“We’ve got a good mix of seniors and youngsters now and that is the main thing[ behind the success]” he said, particularly singling out Kusal Mendis, who grabbed his chance in the opening slot and looked settled in the position, notching up two back-to-back fifties.
“Before this tour, Mendis hasn’t played much as an opener,” said Chandimal of his batsman. “He played a couple of matches as an opener at the very start of his career, and after that he batted at 3 and 4. On this tour, we had a chat we thought that he was a suitable opener, and we can get the right-hand/left-hand combination at the same time. I think he grabbed all the opportunities. That was really good. Now, there is so much competition in our team. That’s a really good sign,” he added.