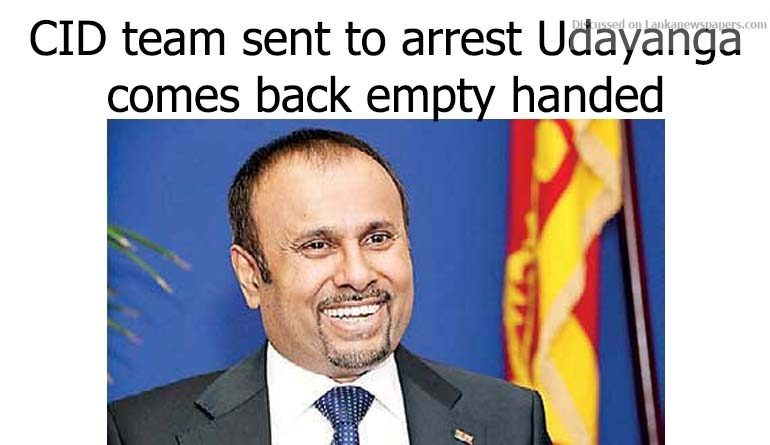 The teams which travelled to Dubai to arrest wanted former diplomat Udayanga Weeratunga returned to the country empty handed on 13 February (Tuesday).

The former Ambassador to Russia and Ukraine has been evading a warrant of arrest, issued in 2016 in relation to investigations pertaining to alleged embezzlement of public funds to the tune of $ 7.833 million, with regard to the now-infamous MiG procurement deal. However, both teams that went to the UAE to arrest the former diplomat failed to even record a statement. Weeratunga was temporarily detained in the UAE when he attempted to leave for the US.

“The team was not allowed to question him, as this was not possible under the laws in their country,” a top CID source told Daily FT.

This is despite negotiations the delegation which travelled to the UAE had had with the concerned authorities in the UAE.  Last week, a joint statement issued by the Foreign Ministry and the Law and Order Ministry confirmed ongoing negotiations between the two countries with the aim of having Weeratunga deported to Sri Lanka to answer the allegations levelled against him. The Foreign Ministry was unable to share information on the current situation.

The CID and FCID, who are investigating the case, have now upgraded the Interpol notice to a Red Alert, sources said. Under the classification of notices in Interpol, the Government can “seek the location and arrest of wanted persons with a view to extradition or similar lawful action.” However, the CID is unable to proceed with the arrest yet, the CID senior officer said.

“We cannot do anything now, it is now up to the Attorney General’s department to work on the issue,” he said.

Sources within the Attorney General’s department said that officials are working on the case with the corresponding authorities in the UAE. In cases similar to this, an arrest with the assistance of corresponding authorities in the host country can be carried out when an indictment is issued, while arrests for questioning only happens in very rare instances, Daily FT learned.

The FCID has not completed the case and no indictment has been served to Weeratunga, making extradition difficult.

“There are some steps that have to be taken before an arrest can be made, we are now in the process of taking those steps,” highly placed sources in the Attorney General’s (AG) department told Daily FT.

The extradition treaty between the two countries has been signed but is yet to be ratified, the Foreign Ministry confirmed. In a situation similar to this, a country is technically able to extradite a wanted person with the guarantee of reciprocity, experts said.

“There is little we can do at the moment as this has now become a concern of interstate relations, ongoing measures are being taken. However it is a very fluid situation at present,” the AG’s department source said.