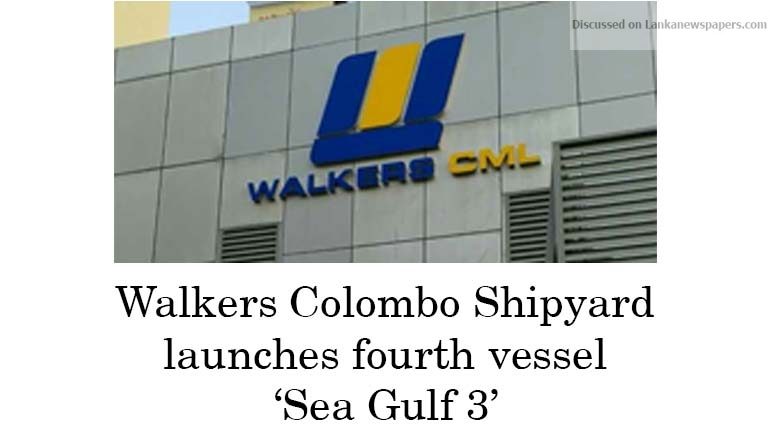 This was built under supervision of the Indian Register of Shipping (IRS CLASS), the certifying authority for vessels. Aforesaid tug is of 16 m length, S m width and 1.65 m of Draft. It is capable of handling of 10 tons Bollard pull and equipped with 2 X 400 horse power Cummins engines and a Cummins Generator.

Dr Sarath Obeysekera, the MD of the Walkers Colombo Shipyard and ex CEO of the Colombo Dock Yard & the ex Chairman of the Sri Lanka Land Reclamation and Development Corporation who contributed a tremendous effort to develop the Shipyard to be a world class ship building outfit in Sri Lanka, revealed that “there are plans to build up more vessels to the Maldivian and the other clientele at the proximity of the Sri Lankan waters in the near future and he further mentioned that Shipyard has managed to build four of state of the art vessels amidst the ongoing construction work. Walkers Colombo Shipyard envisages to promote new boat buildings and to undertake repair work of vessels up to 65 meter long and maximum weight of 1200 tons ” in future.

MTD Walkers PLC, The Sri Lanka’s only fully integrated engineering solutions provider, expanded its presence in the Marine Engineering sector in 2015 by unveiling its plans to open a state of the art ship repair facility in MutwalHarbour with an investment of over USD 8.5 million. The 3.5 acre facility upon completion will be equipped with a Ship lift and A Transfer System, which will be commissioned by mid February 2018.